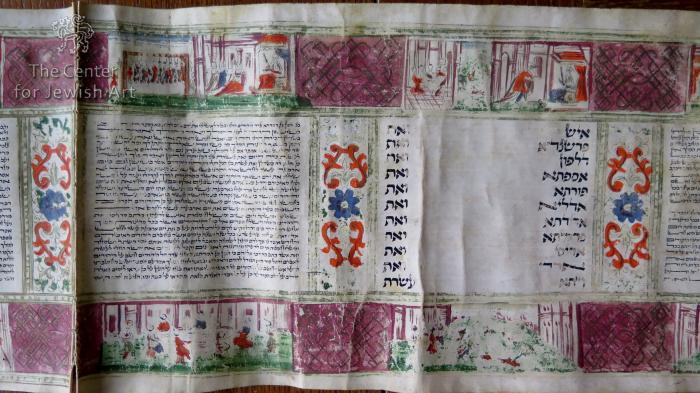 The eighth and ninth text panels (sheet no. 3) are surrounded by a printed and colored border including:

Frame 15 (text panel 8 - upper margin): On the right, Ahasuerus sits on a throne topped with a canopy and holds a scepter in one hand and with the other hand, he points at Mordecai, who stands before him wearing a turban and an overcoat and bows slightly before the king (Es. 8:15). In the center, figures are fighting in a field; two men are lying on the ground. This is one of the moments when Jews battle their enemies but it is difficult to determine which particular verse is illustrated here (Es. 9:5-12). On the left, five men sit around a laid table. The scene most likely depicts the happiness of Jews at the news of the king's new decree (Es. 8:16-17).

Frame 16 (text panel 8 - lower margin): Several figures are depicted fighting in a field flanked by buildings. Four soldiers holding spears emerge from the left and several bodies already lay on the ground. The scene can depict either Jews who battle their enemies (Es. 9:5-12) or an additional day of the Jews fighting against their enemies (Es. 9:15-16).

Frame 17 (text panel 9 - upper margin): On the right, Ahasuerus sits on the throne under a canopy and holds a scepter. The crowned Esther kneels before him and she is attended by her two maid-servants. On the left, Haman's ten sons are hanging on the same gallows and on either side of it, a guard with a spear in his hand is standing (Es. 9:14).

Frame 18 (text panel 9 - lower margin): Seven men in turbans on their heads who sit around a long laid table are depicted. Two servants carrying trays go out of the room from both sides (Es. 9:17).