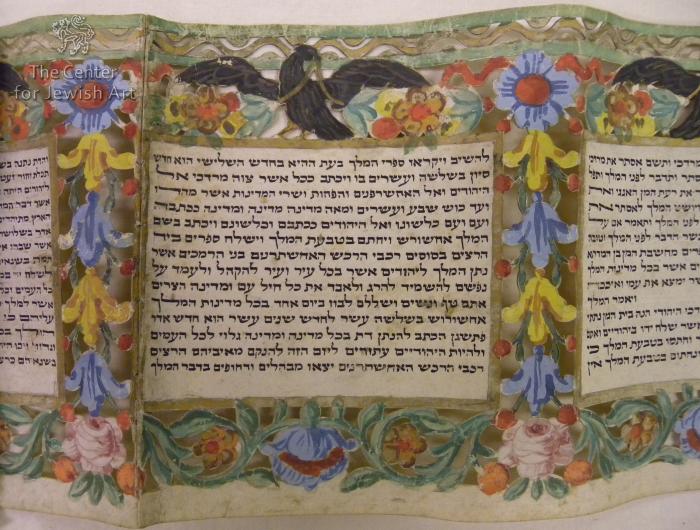 Text column no. 16 (sheet no. 3) is surrounded by cut-out and colored decorations.

The manuscript (the text, decorations, and parchment membranes) is preserved in very good condition.

The scroll is formed of 4 sheets containing a total of 21 columns of text with 14 lines each, except for col. 18 which has 11 lines divided into two half-columns.

The text is written in Hebrew square script, in black ink on the flesh side of the parchment membranes, which are thick and stiff. The sides of the membranes differ: the blank side is rather yellow and smoother than the side of the text and decorations.

The letter ח (Es. 1:6) is highlighted by its form (it is formed of two parts joined with a roof) and it is slightly larger than an average letter in the scroll. The letter ת (Es. 9:29) is enlarged and bolded. Other enlarged and diminished letters are included in col. 18.

The ruling – horizontal and vertical lines - is made with a hardpoint. It seems the upper and lower horizontal lines are marked.

Frames of the text panels may have been originally painted in gold.

On the lower margins, drawings in pencil can be seen.