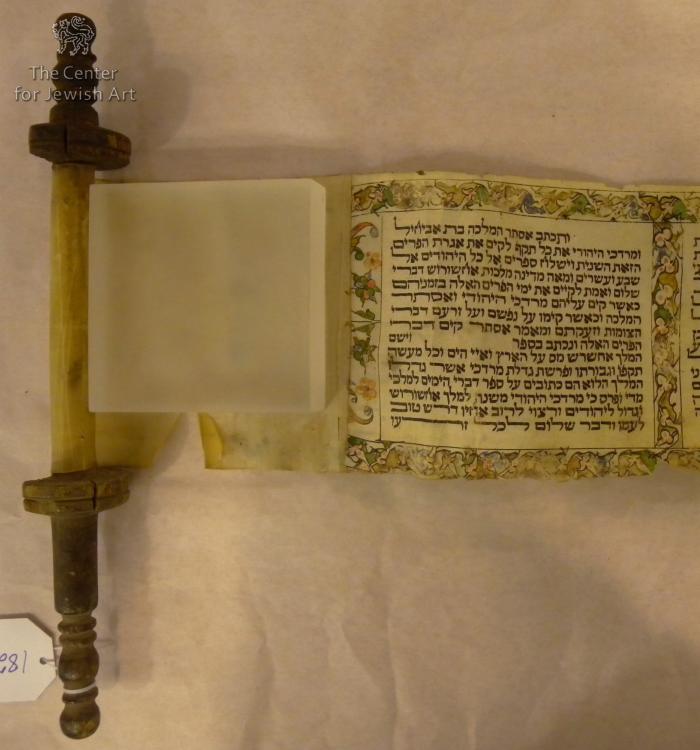 The nineteenth column of text (sheet no. 5) is surrounded by repeating floral ornaments.

The manuscript is incomplete.

The first membrane is seriously damaged - it is torn in several places and two small fragments are missing. Some damages on the last membrane can be seen too.

The first and the second sheets are loosely stitched.

In some places, ink and paints flaked off.

The scroll is formed of 5 sheets containing 19 columns of the text with 16 lines each, except for col. 15 which includes 11 lines divided into two half-columns.

The text is written in Hebrew square Oriental script in black ink on the flesh side of parchment sheets that are very stiff and seem to be dry and brittle. They are rather bright but the membranes feature different shades. The side of the text and decorations is brighter than the blank one which is rather brown.

In the first column only, tagin are added to the letters.

The letter ת (Es. 9:29) is enlarged. Enlarged and diminished letters are included in col. 15.

The ruling - horizontal and vertical lines - is made with a stylus and is well visible on the blank side of the membranes.

The final part of the manuscript (ca. 100 mm wide) is blank.