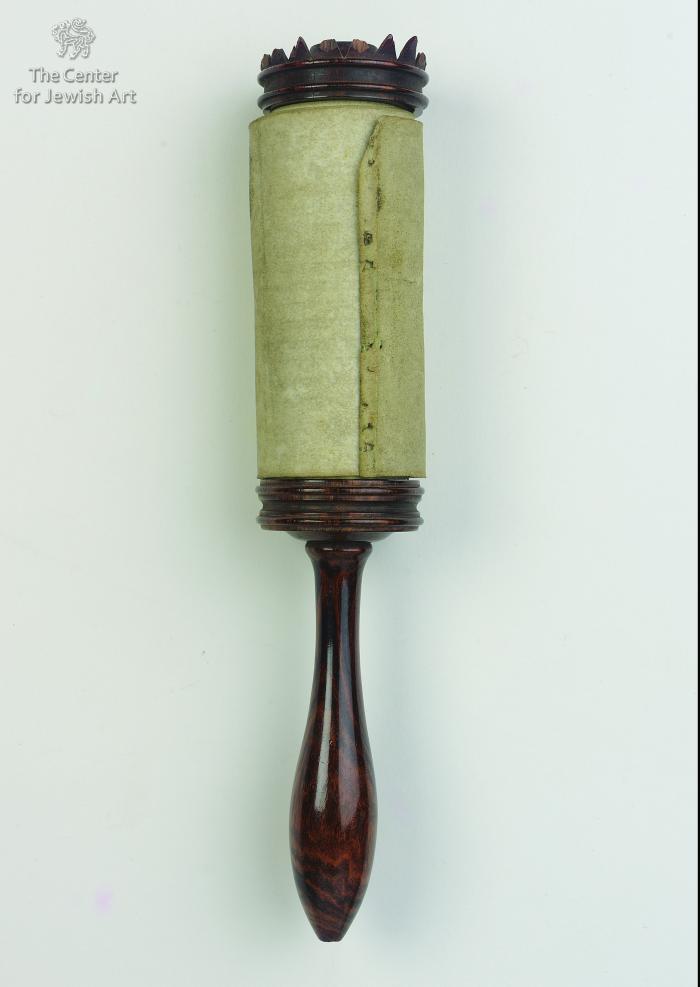 The scroll is mounted on a wooden roller with a long handle.

In general, the manuscript is preserved in very good condition, although there are some orange stains on the membranes.

Originally the scroll was glued to the roller but currently, they are joined very lightly.

There are small holes at the right edge of the first membrane; possibly a pull bar was stitched to it.

The Book of Esther in Hebrew that is accompanied by a separate benediction sheet with the blessings recited before and after the Megillah reading, followed by a liturgical poem for Purim, Korei megillah.

The scroll is formed of 4 sheets containing a total of 38 columns of text with 14 lines each, except for col. 32 which has 11 lines divided into two half-columns.

The text is written in Hebrew square Italian-Sephardi script with tagin in black ink on the flesh side of parchment membranes that are thin, bright, and smooth. The blank side of the sheets is more suede and darker.

The tagin are drawn very precisely and it seems they were made with the same ink as the decorations.

The initial word in the scroll - ויהי - is written in decorative, enlarged, and bolded letters.

The letter ח (Es. 1:6) is highlighted by its form - it is composed of two parts joined with a very high roof. The letter ת (Es. 9:29) is enlarged. Other enlarged and diminished letters are included in col. 32.

The ruling is made with a hardpoint along with the sheets but it is barely visible; only in col. 32 the lines are more clear.

The sheets in the scroll are stitched but underneath the sheets, in the places where the subsequent sheets are joined, narrow strips of parchment are glued to reinforce the stitching.

The benediction sheet is very thin, bright, and slightly crumpled; its blank side is darker.

Some letters (or letters' components) are placed on the decorations; this suggests the pattern was executed before the text was copied.