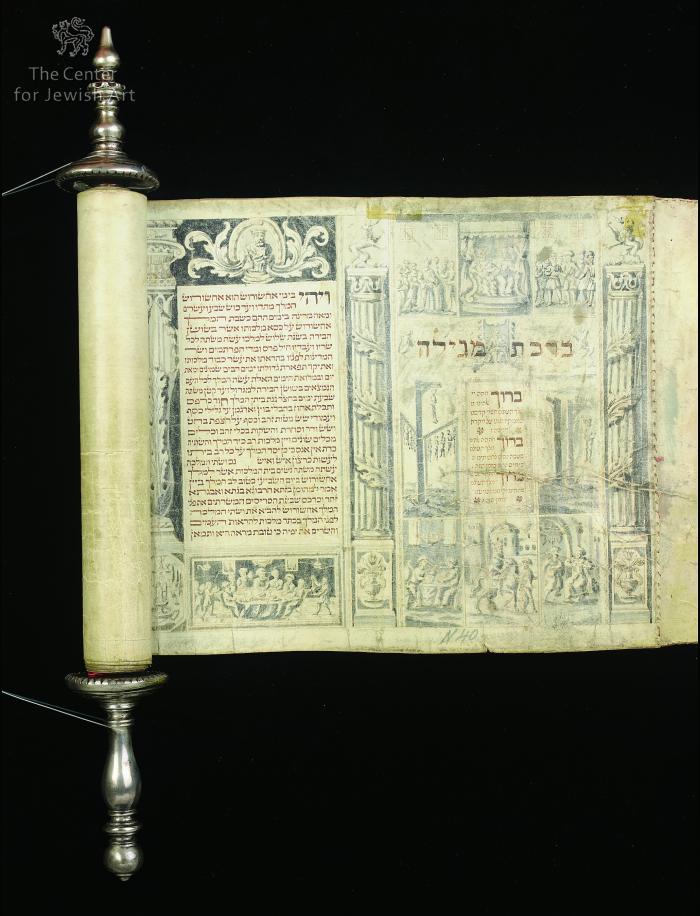 The first sheet contains the opening decoration and four columns of the text (nos. 1-4); only the first of them is visible on the image:

Opening decoration: The scroll opens with a panel containing several narrative scenes from the Esther story. In the central part of its upper register, there is the royal couple seated on the throne with a canopy that is placed on a pedestal. The king and the queen are accompanied by courtiers; on the right stand the princes of Media and Persia (Es. 1:14), and Esther's maidservants stand on the left (Es. 2:9). Below, the Hebrew words ברכת מגילה - "blessings for the Megillah" are printed in a rectangular panel. Below it, there are three rectangular frames: the central panel contains the benedictions recited before the Megillah reading that are decorated by hand, the panel on the right shows the chamberlains, Bigthan and Teresh, hanging on two gallows (Es. 2:23), whereas the one on the left depicts Haman and his sons hanging on three gallows (Es. 7:10 and Es. 9:14 or Es. 9:25). The lowest register also contains three episodes (from right to left): Mordecai receiving the clothes from Hatakh (Es. 4:4), Haman leading Mordecai through the streets of Susa (Es. 6:11), and Esther and Mordecai writing letters instructing the Jews to observe Purim (Es. 9:29).

Text column no. 1: The initial word of the Megillah (ויהי) is written in enlarged and bolded letters. In the upper margin, above the column, a medallion with a bust flanked by acanthus leaves is depicted. In the lower margin, the feast of the king is shown (Es. 1:3-8) - there is a group of seven people seated at a round laid table; additionally, on either side of the table, servants are visible.

A piece of fabric underneath the opening section: 200x90 mm.

The text and decorations are preserved in good condition.

The beginning of the scroll is damaged and very dirty despite a protective fabric stitched to it; in general, the parchments are dirty.

Some sewings between the second and the third sheets are torn.

Some pieces of membranes are reinforced with tape and tape traces in several places are visible.

The scroll is formed of 4 sheets containing a total of 16 columns of text and two additional benediction panels at the beginning and the end of the scroll. Each column includes 24 lines of text, except for col. 14 with 11 lines divided into two half-columns.

The text is written in the Hebrew square script with tagin in brown ink on the flesh side of parchment membranes that are rather thin. Both sides of the parchments are similar, but the blank side is smoother than the side of the text and decorations.

The ruling is made with a hard point.

The pricking can be seen after the last text panel.

The final blessing starts with a large word ברוך placed in the upper margin and is copied in the square script. In the panel below it, the Purim poem is copied in semi-cursive letters, while its initial word and letters opening the subsequent verses are square, enlarged (4-5 mm high), and bolded.

Before the opening decoration and after the final panel, there are blank spaces that are 90 mm wide.

The ornamentation in the scroll was sketched in brown ink, the same in which the text was written and the outlines are filled with black or grey paint. Different hues of grey color used in the ornamentation imitate sculptures or reliefs.

The former number of the manuscript - N40 - above the opening decoration can be seen.

No bibliography on the manuscript is available but engraved scrolls sharing similar pattern are discussed e.g. in: