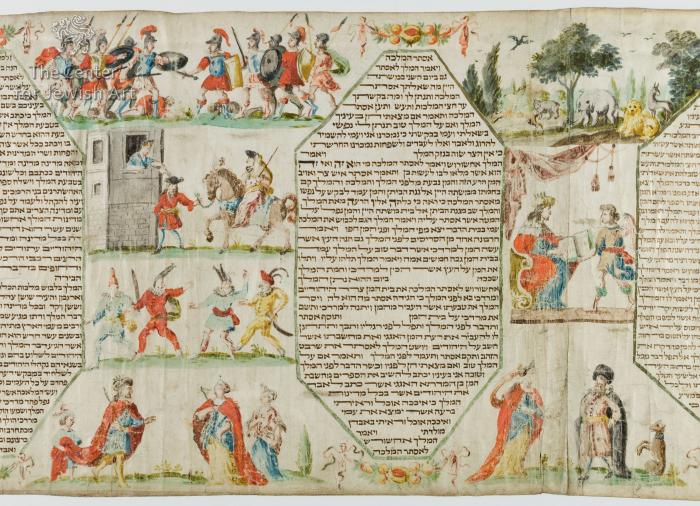 1. Unidentified scene showing a group of animals seated under trees.

2. An angel reads the imperial chronicles to the king (an extra-biblical story based on Es. 6:1-3).

3. Unidentified scene showing Mordecai and Esther with a dog.

4. The Jews fighting with their enemies, both dressed in Roman armor. It is difficult to determine which particular verses this represents, especially since the scroll does not consistently depict scenes from the book in chronological order.

5. The depiction joins two scenes: Mordecai's triumph (Es. 6:11) and Haman's daughter who empties a chamber pot on her father's head (based on Megillah 16a).

6. The Jews rejoice after the victory over their enemies (Es. 8:16-17) - represented by four people in clown costumes, perhaps court jesters.

7. Esther before the king, possibly at the moment when he gives her Haman's property (Es. 8:1). Esther is attended by a maid, and the king's mantle tail is carried by a page.

Illustrations nos. 1-3 are party painted on the second membrane.