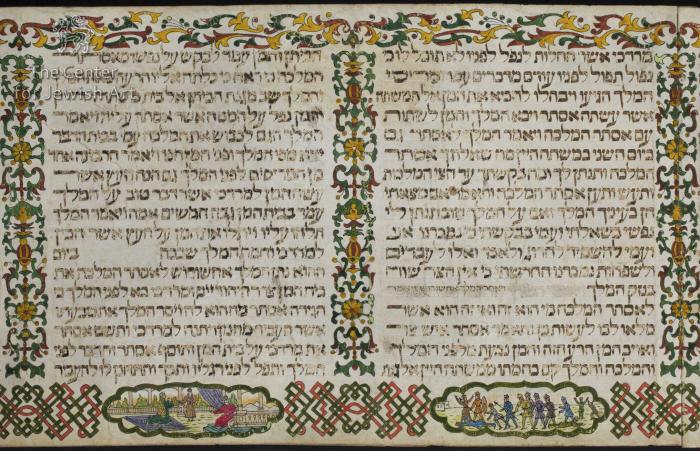 Cartouche 16: A group of soldiers holding spears and fighting on a battleground is depicted. Two figures, on the right and on the left, lie dead on the ground and two men raise their hands (Es. 9:5).

Cartouche 17: On the right, Ahasuerus sits on the throne and outstretches his right hand towards Esther who is kneeling before him and raises her hands in the air (Es. 8:3). A man (Mordecai?) stands in the center and gestures. The scene is difficult for an unambiguous interpretation because, in the Book of Esther, it is not the only episode when Esther pleads with the king. In this case, the presence of Mordecai (?) suggests that it depicts the moment when Esther is begging the king to annul the decree against the Jews.

In general, the manuscript is preserved in fair condition; in the best condition are illustrations.

The state of preservation of particular membranes is different.

The beginning of the scroll is yellow and very smooth.

The membranes are crumpled in some places and due to this, the text is seriously damaged (especially on the first membrane). Additionally, the sheets are folded in some places.

The text is in poor condition, but it is legible.

The roller lacks its lower finial.

The scroll is formed of 7 membranes containing a total of 26 columns of the text with 17 lines each, except for col. 22 which includes 11 lines divided into two half-columns.

The text is written in Hebrew square Italian script in brown ink on the flesh side of parchment sheets that are very thick and stiff. The sides of the membranes are different - the side of the text and decorations is brighter and smoother than the blank side that is slightly yellow and less smooth.

The letter ח (Es. 1:6) is highlighted by its form - it is formed of two parts joined with a roof. The letter ת (Es. 9:29) is enlarged. Other enlarged and diminished letters are included in col. 22.

There are some corrections and erasures in the text; they were done with a different tool and in black ink. Underneath one word in col. 3, a layer of white paint (?) can be discerned.

The ruling - horizontal and vertical lines - is made with a hardpoint; upper and lower lines are marked.

It seems that the illustrations were executed by two artists and some of them seem to be based on the episodes depicted in the scrolls representing Gaster I type (in the Index see "Gaster I type Esther scrolls").

The drawings were sketched in pencil (some remains of sketches are still visible), later the lines in black ink were drawn, and the outlines were colored with paints.

It is very likely that until around 1932 the scroll belonged to the collection of Sally Kirschstein.

Online collection of the ritual objects from the E. Ringelblum Jewish Historical Institute is available here: https://cbj.jhi.pl/documents/603815/0/ (accessed on 12.07.2021).