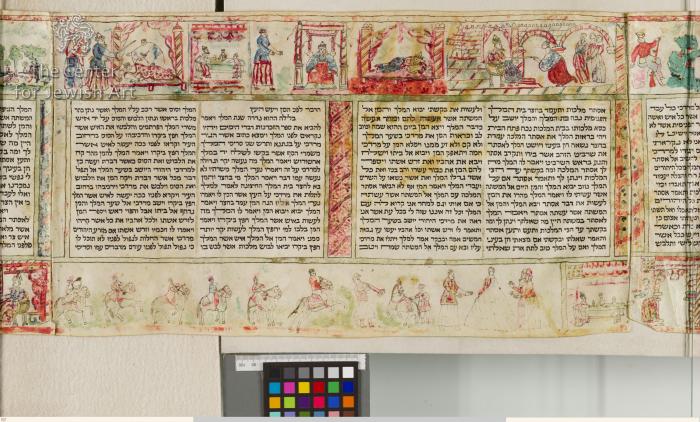 Text panels nos. 7 and 8 (sheet 4) surrounded by the hand-painted decoration.

14. Esther kneeling before the king who extends the scepter to her and she touches it (Es. 5:2). The queen is attended by three maidservants.

16. A man in a long Oriental gown before the king seated on the throne - Haman advises Ahasuerus how to honor a man he wishes to reward (Es. 6:5-10.

18. On the left, the king attented by two servants is visible. On the right, a bed on which the queen reclines and a man standing close to her. The scene represents the moment when Ahasuerus returns from the garden and Haman is falling on Esther's bed, begging for his life (Es. 7:8).

16. On the right, a woman in a long fashionable dress stands between three men whose gestures suggest conversation - an unidentified scene with Esther and Mordecai. The rest of the margins is filled with several mounted men - likely the king's messengers.