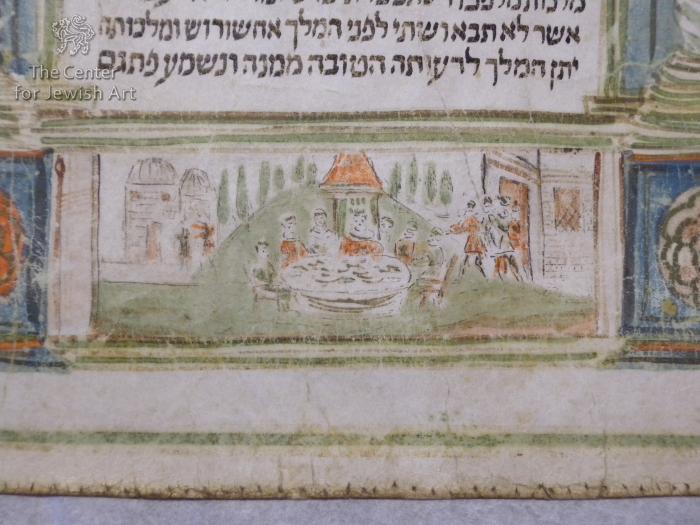 Frame 2: This frame depicts Queen Vashti's feast in the royal gardens. Vashti sits under a high canopy at a large round table ready for a feast. Six women accompany her at the table, three on each side. To the right, a group of servants enter the garden through a gate; the first of them appears to be addressing the queen. This most likely represents the servants informing Vashti of King Ahaseurus's order for her to appear before him and his guests at his feast (Es. 1:10-11). The additional scene on the left may depict the moment when Queen Vashti, after her refusal to appear at Ahaseurus's feast, is taken from the palace (alluding to Es. 1:19).

The family of Italian Esther scrolls from the second half of the 17th century named by Mendel Metzger after Judaica collector, Moses Gaster (1856–1939), of whose collections an exemplar of this manuscript formed a part (see M. Metzger, “The Earliest Engraved Italian Megilloth”, Bulletin of the John Rylands Library 48:2 (1966), 381‒432, esp. 390). It includes Esther scrolls produced in mixed technique in which decorative border is partly printed and colored by hand while the Hebrew text of the Book of Esther is inscribed by a scribe. Main part of the decorations consists of a series of arcades, under which the text of the Book of Esther was inscribed. The text panels are interspersed by columns whose bases are decorated with flowers that separate rectangular frames with figurative scenes chronicling the Book of Esther. Upper margins are filled with a balustrade on which are placed flower-filled vases and pairs of roosters and turkeys. These details are present in all exemplars of the scrolls, however, particular manuscripts differ in detail. The decorative scheme of Gaster II scrolls shows common features with Griselini scrolls.

The scroll if formed of 5 membranes on which 19 text columns are inscribed with 22 lines per column, except for col. 16 with 11 lines, divided into two parts.

The text is inscribed in black ink, in the Italian square script on the flash side of the parchment membranes.

The name "Gaster II" was introduced by Mendel Metzger in an article entitled "The Earliest Engraved Italian Megilloth" published in the "Bulletin of the John Rylands Library" (48:2 (1966), 381‒432, esp. 390). The type was named after Moses Gaster (1856–1939), the rabbi, scholar, and Judaica collector of whose collections a scroll adorned with this pattern formed a part (at present this is the scroll Gaster Hebrew MS 711 stored in the John Rylands Library in Manchester that is the scroll under discussion). At least 8 manuscripts representing this type are known; they are preserved in private and institutional collections. For descriptions of other scrolls decorated with a similar pattern see IDs: 5203 and 36152.

On the edges of the first membrane, a pricking is visible that suggests that a belt of fabric could be sewn underneath as it was customary in the Amsterdam Jewish communities.

Louis Hirschel, List of Unique and Rare Items from the Bibliotheca Rosenthaliana