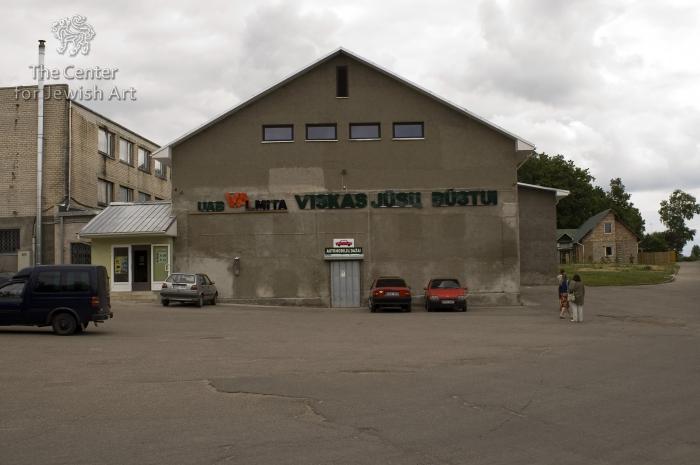 The beit midrash burnt during WW I and engineer J. Mickevičius prepared a design for its reconstruction in 1922. According to the design, the beit midrash had a rectangular ground plan and was covered with a high hipped roof. The western part of the building was two-storey; it included a central men’s vestibule, a northern women’s vestibule and staircase, and an additional room in the southern part. The women’s section occupied the first floor above these premises. The eastern part of the beit midrash housed a prayer hall. The hall was almost square, lit by twelve windows, four each on the southern, eastern and northern sides; five latticed rectangular openings connected the hall with the women’s section. Four Tuscan columns stood on pedestals close to the central bimah and supported the ceiling, fixed to the tiebeams of the roof. A space for the Torah ark was assigned in the middle of the eastern wall. The lateral rooms of the western part, the women’s area and the prayer hall were heated; the stoves stood in the middle of the hall, close to the bimah.

The eastern façade was symmetrical, divided by lesenes into five bays. It was pierced by four round-headed windows, and a round-headed niche marked the interior position of the Torah ark. The northern façade was divided by lesenes into six bays; four of them matched the prayer hall in the east, while two western bays belonged to the two-storey part. Four eastern bays were pierced by round-headed windows, the westernmost of which was combined with an emergency exit. The openings of the western bays were rectangular. The walls were crowned with a stepped cornice. Judging from the documents that accompanied the design, the construction works were accomplished by 1922. After WW II the interior layout and the exterior shape of the building were transformed. The inventory plan of the former beit midrash drawn in 1949 shows that part of the openings were already blocked, the staircase was transferred to the central vestibule, the location and the form of the stoves has been changed, and new partitions added. The building’s plan remained basically unchanged until 1970.

In 2006 the extant structure was built of bricks, plastered, and covered with a tin gable roof. The original building was extended eastwards, heightened, and annexes were attached to its southern, eastern, and northern façades. The western façade stands on heightened socle and is surmounted with a triangular gable. Its corners are articulated by lesenes, which do not reach the roof, and thus mark the former height of the walls. The central doorway probably corresponds to the original one; other openings originate from later reconstructions. Marks of built-up rectangular openings can be seen beneath the plaster. The southern façade has two windows in its western part and two lesenes, which probably belonged to the original design. Other openings, including a gateway and a doorway are post-WW II products. In the interior, four round plastered pillars around the former bimah and some of round-headed openings have survived.