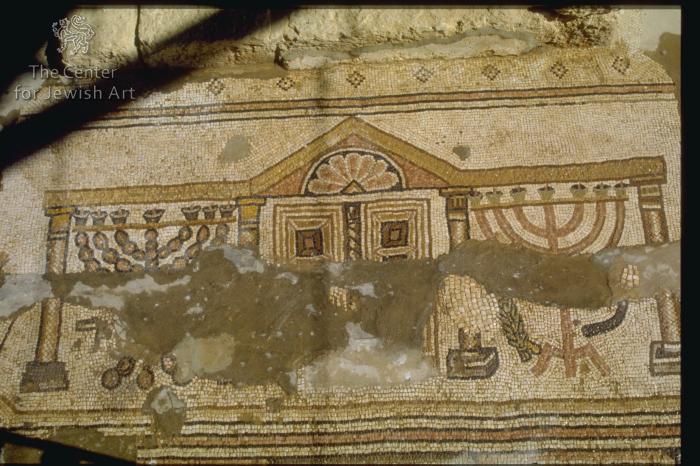 The rectangular panel depicting the Sanctuary implements is situated at the eastern end of the main hall, above the geometric panel. The panel depicts a building facade, with Sanctuary implements between its columns, flanked by two rams. The building facade's central columns support a gable centered by a conch. In the center of the building facade, below the gable is the Torah shrine, flanked by two seven-branched menorahs. The menorah on the right is set among a shofar and a lulav; the menorah on the left is adjoined by a mahtah. No additional elements remained.

The Torah shrine is composed of a central column flanked by two closed doors decorated with a square geomtric pattern. The menorah on the left, is composed of alternating round and oval links and the one on the right of plain stripes. The stem and branches of each menorah, is connected on top by a bar, upon which seven lamps are set, all seven lamps are lit. The menorahs differ in the design of their bases: On the right, Three ribbon-like leggsamerge from a bar. On the left, three beadlike legs form the menorahs base. Flanking thebuilding facade from both sides are two rams, depicted in profile facing the center. Each stands on small hills, adjacent a thin branch with blossoms. The panel is framed by parallel lines.