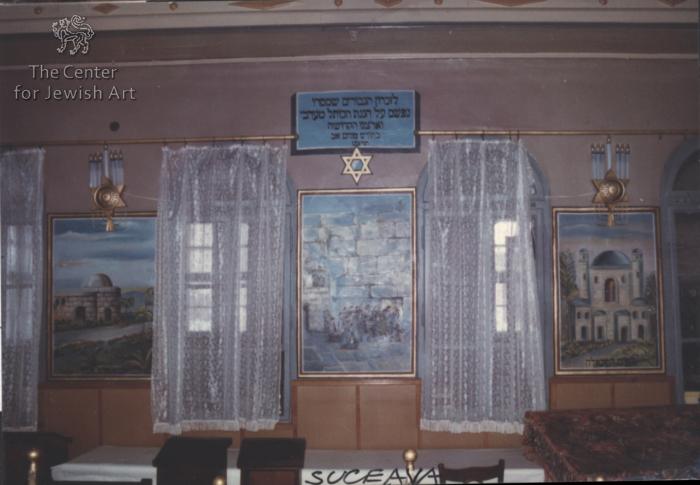 The prayer hall is square in a plan, covered by a flat ceiling. According to a dedicatory plaque, it was renovated in 1929. The eastern and western walls of the prayer hall and the ceiling decorated by symbolic images as well as the illustrations of holy places. Flat ceiling is decorated in the form of a round plafond which looks like a sky with a swallows flying over it. The images of the Four Animals from Pirkei Avot are placed on the four corners of the ceiling. Musical instruments, ethrog and lulav  are situated between images of the animals. Two borders of the zodiac signs are depicted on the north and south sides of the ceiling. The Symbols of Tribes of Israel adorned the eastern and south walls of the prayer hall. The Torah Ark in the form of a cupboard is richly decorated with gilded carvings. Two gilded lion supporting tables of the covenant crowned the Torah Ark. The Torah Ark placed on a background of azure curtain with gold tassels. The architectural decoration in the form of columns and complicated cornice surrounds the walls of the prayer hall. According to Streja A., and Schwarz L., (The Synagogue in Romania, 116)  the murals was made by local painter Nosig.