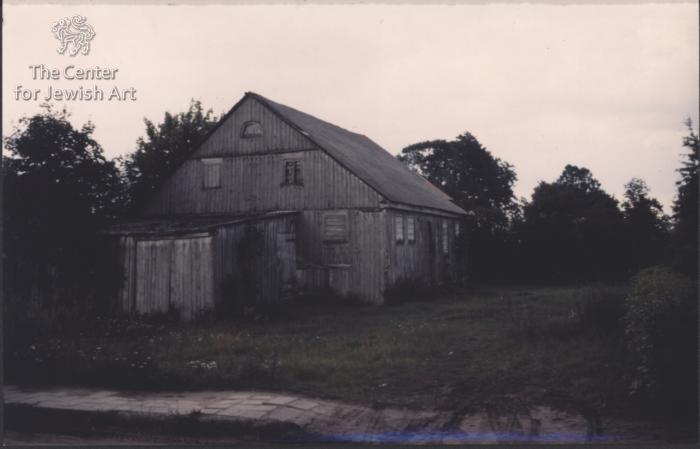 The wooden synagogue, probably built in the late 19th century, stands in the center of the town at one of its main streets. The synagogue is a rectangular log structure on a masonry foundation, elongated on an east-west axis, 13.19 m long, 11.95 m wide and about 9.50 m high above the foundation. The log walls are reinforced with vertical posts and sided with vertical planks. There were two entrances, on the northern and western façades, however it is not clear which was the main one. The exterior clearly shows the interior division of space into a lofty prayer hall and a two-storey western part with a vestibule and first-floor women’s section. The interior partitions have not survived, and today the interior is a single space. The interior was lathed and plastered. Today, the plaster is largely lost; where it survives, traces of blue painted frieze can be seen. The prayer hall was a “broad house,” ca. 9 m long and 11.5 m wide. It seems that its floor was ca. 0.5 m higher than that of the western rooms. The Torah ark stood in the middle of the eastern wall, and the bimah occupied the center of the hall. The hall was spanned with a flat ceiling, tied to the roof trusses. It was lit by ten rectangular windows: two pairs of windows in the eastern wall, and three windows each in the southern and northern walls. The exterior wooden framings and seals of these windows are elaborately molded. The windows of the western part of the synagogue are rectangular, set in two tiers, matching the entrance floor and the women’s gallery. Most of the windows are currently planked up. The synagogue is topped with a gabled roof, covered with asbestos sheets over old shingles. The western gable is pierced with two rectangular windows in a lower tier and a small semicircular window above them. The eastern gable is pierced with two rectangular windows in its lower part.

In autumn 1941 the synagogue together with all its movables, including a comparatively large number of books, was locked and sealed, and its keys were kept with the town’s authorities.

After WW II the former synagogue served as storage space, and a wooden annex was added to its western façade. Since the 1990s the building has been abandoned and the annex vanished in the 2000s.