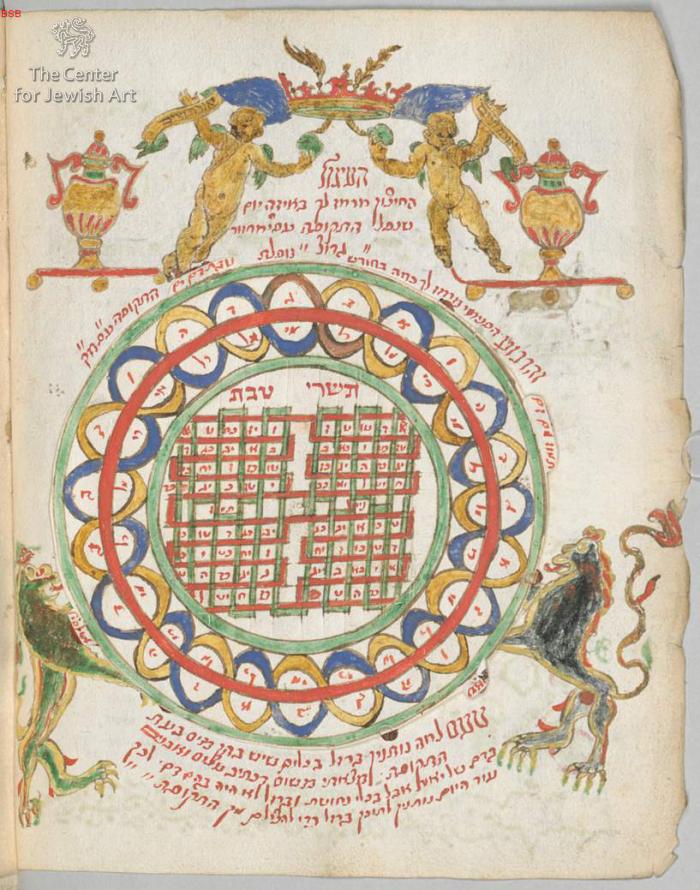 The discs (iggulim=circles) also called volvelles, are composed of three or more superimposed rotating paper discs, fixed to the page by a thread. Some of the paper discs, as well as the volvelle on MS II:67 are missing.

MS I:17v (fig. 1): the volvelle encloses Rav Nahshon's Circle, which includes the fixed type of years (kevi'ut ha-shanah), the turning of the seasons (tekufot) and the holidays. The circle is supported by two rampant lions, surmounted by a crown with laurel branches flanked by segments of sky, below which are two winged putti. Each is holding in one hand a ball attached by a string to the crown, and in the other a scroll inscribed אורח חיים (Orah Hayim). Two large vases resting on flat bases flank the putti.

The volvelle is surrounded by explanations in red ink. Above the circle:

In MS I some of these signs, as well as the lions' forelegs, are hidden beneath the rotating disc. For the linking of the tekufah to water, which at the time between one tekufah and the next would turn into harmful blood, see Carlebach (2011:165-169).

Below the disc there is an inscription in red ink which alludes to the "danger of the tekufah" (i.e. the danger at the seasonal change), reading:

(The reason why put an iron [implement] into the vessels with water during the change of the tekufah?

I have found [in the Bible] that [vessels of] wood and stones [contained] the blood of theNile[Ex. 7:19], but in vessels of copper and iron there was no blood. So even today some put iron in them [in the vessels] to be saved from [the danger of] seasonal change).

This inscription relates to the custom of not drinking water at the critical time of the seasonal change. This custom appears in halakhic codes, books of customs and Sifrei Evronot, where it was the only religious ritual specifically promoted by calendrical literature in Ashkenazi sources. Although the origin of the custom is obscure, in Pinhas' Evronot, for example (MS II:65v), the explanation for the danger of the unprotected water in the tekufah is that "when the season is changing, one part of the world remains unguarded, and the harmful forces have permission to cause damage, and [exposed] water can be contaminated; therefore people refrain from drinking water at that time".

Rabbi Joseph Karo modelled the framework of Shulhan Arukh after the Arba'ah Turim of Rabbi Jacob ben Asher (1270-c.1340); and the perpetual calendar, Hilchot Rosh Hodesh in Tur Orah Hayim, is based on Iggul deRav Nahshon. Thus, the inscription "Orah Hayim" on the putti's scrolls may refer to Karo's work, which apparently was within reach to Zvi Hircsh (Nigal 1993:12, 20).