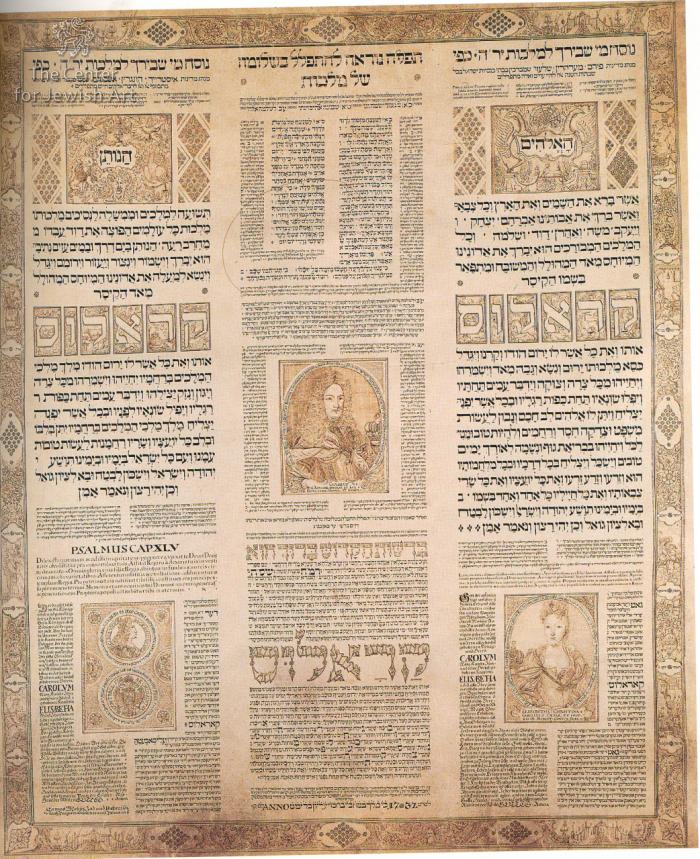 The text is written on a large sheet in three columns and surrounded by an illustrative and decorative border.

The text within the columns is written in shaped-text in different sizes and characters of script, is inserted carefully in a symmetrical order. All was done in ink and sepia by the hand of the scribe and artist Meshulam Simmel. This well-balanced composition gives a prominent place to the image of the Emperor by emphasizing his name three times. He is also accompanied by the portrait of his wife the Empress and by the depiction of the Taler, which symbolizes his sovereignty. Elizabeth's portrait and the Taler are portrayed in the lower sides of the sheet, leaving the main position for His Majesty the King.

Three illustrative panels, in each column: enclosing the portraits of the Emperor Charles VI (central column), Empress Elizabeth Christina (right column), and the depiction of the Taler (left column).

Eight biblical scenes are set at the right and left sides of the borders illustrating the eight figures in the "Who delivereth" (Mi She'ana) prayer written in the middle column: Abraham, Isaac, Jacob, Moses, Aaron, Joseph, David and Solomon. The illustrations on the right border are (from top to bottom): Sacrifice of Isaac, Isaac blessing Jacob, Jacob wrestling with the angel and Joseph interpreting Pharaoh's dreams. The illustrations on the left border are (from top to bottom): Moses with the tablets of the Law, Aaron the High Priest, David as musician and King Solomon. Each scene is alternated by a quatrefoil cartouche inscribed with the verses corresponding to the illustrated figure, and by decorative elements such as vase of flowers, mask or floral decoration. The upper and lower sides of the border are decorated by vignettes of courtly architecture, bunch of fruits, human masks and geometrical motifs.

Two decorated initial words on the right and left columns: the initial words: G-d (right column) and Who gives (left column) are both written within inhabited panels and flanked by narrow panels of small lozenges.

Decorated initial letters: The name Carolus on both right and left columns is written in large letters in spared ground technique, each within a separate illustrative panel of animals and wanderers. In the middle column the letters of the name Carolus are designed as ribbon like.