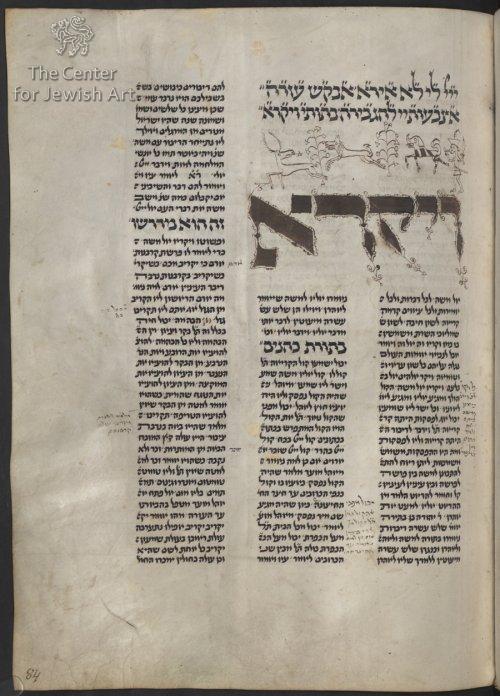 Vol. I:84; vol. II:122v: Initial words for some books were inserted by a 14th-century hand in the blank spaces allocated by scribes A and B. The initial words are written across two text columns in large display letters in brown ink, some crudely decorated.

The initial words at the beginning of the books of Leviticus and Ruth are decorated with hunting scenes. The first word of Leviticus (I:84 ויקרא) is surrounded by wriggle work and foliate extensions, decorated above by two dogs chasing a deer, with a hunter behind blowing a horn and brandishing a sword. Another horn is tucked in his girdle and he wears a plumed hat. A similar hunting scene of a dog chasing a deer is depicted above the opening word of Ruth (II:122v ויהי). Within the letters, in spared-ground technique, three dogs are chasing a hare, and two grotesque faces.

The Würzburg Biblical Commentaries, which was originally produced as a sumptuous single volume in 1232/3, was divided into two around 1549, after its acquisition by Johann-Jakob Fugger. Each volume was bound by the Fugger Binder (see General Document: Binding). The first leaf of volume I, which was lost, was replaced by a new leaf with the text of the commentary to Genesis copied on the verso (I:1v). The codex was divided according to text and not quires: the second volume starts with the Isaiah commentary on the verso (II:1v), but with the end of II Kings on the recto (II:1r). To separate the volumes a final leaf was added to vol. I with II Kings copied anew (I:128r) from the original (II:1r), before the latter was covered by a new leaf inscribed with the title of Latter Prophtets (II:1r). The replacement commentaries for Genesis (I:1v) and II Kings (I:128r) were copied by Yishai ben Yehiel. Meir decorated the initial word בראשית (Genesis; I:1v - fig. 3) and executed the title page of the Latter Prophets נביאים אחרונים); II:1r - fig. 6) in the second volume.  The two scribes belonged to the Fugger group who worked for him inVeniceduring 1549 and 1552 (see Introduction to Fugger manuscripts). Meir and Yishai also shared their work as scribes in several other manuscripts in Fugger's Venetian group. For example, in Cod. hebr. 26 they changed hands every few pages, though the marginal decoration was always executed by Meir. Meir and Yishai were also responsible for the work of other scribes in the Venetian group, and thus it is not surprising that they were responsible for the replacement leaves in our Cod. hebr. 5.

According to our research the initial words in the Munich Rashi were inserted by a 14th-century hand. The decoration follows an established tradition of illuminated Ashkenazi manuscripts of the 13th and 14th centuries from south and centralGermany. Two types of decoration are noticeable in our manuscript: the letters are each surrounded by wriggle work (ויקרא I:84 – fig. 1, and וידבר I:110v) or decorated in spared-ground technique enclosing a hare hunt and grotesque faces (ויהי II:122v – fig. 2). Both types have pen-drawn hunting scenes on top.

Examples of initial words resembling the wriggle work in our manuscript are found in the Worms Mahzor from Würzburg of 1272 (fig. 3) and the Munich Ashkenazi Mahzor for the Whole Year from south Germany of the last quarter of the 13th century (fig. 4). The spared-ground technique occurs in the David Siddur fromFranconiaof 1308 (fig. 5).

Among the various motifs placed around or within the initial words, a hare hunt, a deer hunt or both frequently appear either as decoration or as text illustrations. An early decorative example in Hebrew manuscripts is found in the Michael Mahzor fromRegensburgof 1258 (fig. 6), in which the initial word panel contains the deer hunt and other animals. A similar example is the Munich Ashkenazi Mahzor of the 13th century, which includes a deer being hunted in the base of the last letter (fig. 7).

In our Munich Rashi (figs. 1, 2 and 8), the hunting scenes of the hare and deer are used as decoration.

However, the similar composition of the deer hunt in the Franconian Siddur and Haggadah of the early 14th century (fig. 9), is an illustration for the prayer for salvation, which alludes to the persecuted Jewish

MunichRashi's Commentary on the Bible            Franconian Siddur and Haggadah

The hunted buck or doe, symbolising the congregation ofIsrael, also appears in the Worms Mahzor of 1272 mentioned above (fig. 10) as an illustration for the piyyut "Beloved Doe" (Shalev-Eyni 2010, pp. 71-86, fig. 44). This hunt also includes a hunter blowing a horn as in our manuscript, though our depiction is purely decorative. A somewhat later example (late 13th century) from central Germany is the deer hunt in the Minute Mahzor (fig. 11). It complements the depiction in the upper register showing the battle of Leviathan with the Wild Ox at the end of days, and symbolises the Jewish people hunted by the nations.