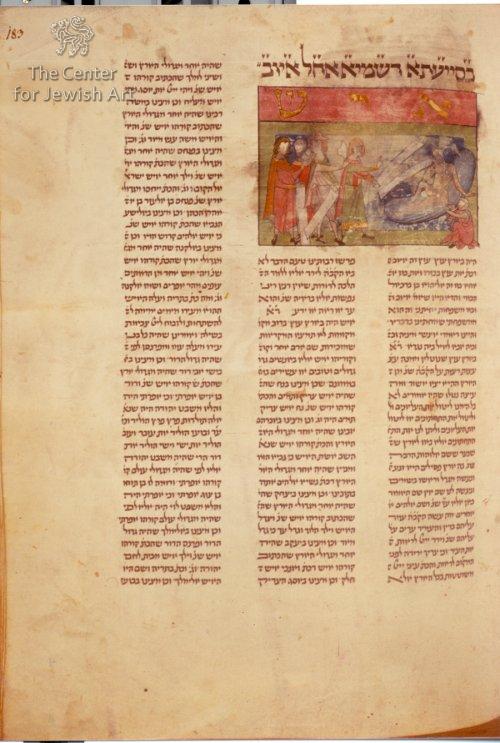 Vol. II, fol. 183: The initial word (איש, A man) of the Book of Job is written above the illustration in gold leaf on a magenta ground set across two text columns.

The panel depicts Job with his four friends and his wife on a faded blue and green ground, illustrating the biblical text (Job 2:9-11 and 32:2) and the following commentary (II:184v, 3rd column, II:200v, 3rd column).

Job, naked and covered with red boils, is on the right, seated on a blue mattress. His head rests on his right hand in which he holds a scroll, and his left hand is stretched out towards his wife, who is seated cross-legged on the ground. With both hands she is lifting the transparent veil which covers Job's lower body, pointing with the index finger of her left hand. She wears a white headdress and a magenta pallium which does not quite cover her left breast.

Approaching Job from the left are the four friends: Eliphaz, Bildad, Zophar (Job 2:11) and Elihu (Job 32:2). Three are carrying scrolls with their arms outstretched towards him. Two have blond hair and travelling hats. They are wearing green, magenta, red and white tunics, two bordered with gold, and three also have chlamydes in magenta, green, and yellow ochre.

Inscriptions in plummet in Latin by the 13th-century hand, and by a later hand in Hebrew display script:

In the upper margin above the panel: איש (Ish) in Hebrew display letters.

The Munich illustration (fig. 1) has some unusual elements, such as a fourth friend; and the mattress Job is lying on also features in other scenes (I:21v and I:40v) instead of a dung or ash heap.

The three friends, Eliphaz, Bildad and Zophar (Job 2:11) were the first to bewail Job's condition and then to condemn him. Elihu, the youngest (Job 32:2-5), reprimands his friends and answers Job. The four friends do not often appear together. However, they do appear in Byzantine manuscripts, such as a 9th-century Book of Job with commentary in theVatican(fig. 2). The three older friends sit next to the hill where the suffering Job bewails his condition, with their crowns next to them. Elihu, a small standing figure, turns to speak to Job. His chlamys suggests that he has just arrived, similar to the standing four in our depiction who wear chlamydes and travelling hats.

The iconography in a later Byzantine manuscript of the 11th century (fig. 3) does not differ much: in the lower register, the three elder friends, their crowns next to them, are sitting on heaps of grass next to the dunghill where Job is seated. Elihu, standing, is wearing a chlamys as in theVaticanmanuscript; Job's wife is missing in both manuscripts.

Four friends but no wife also appear in the west, for example in the later Franco-Flemish Moralia in Job by Gregory the Great of the last quarter of the 12th century (fig. 4).

In the upper register Zophar is talking to Job; in the lower one, the three elders are seated with closed scrolls, and the younger Elihu, with an open scroll, turns to speak to them and not to Job. It is the same episode of the story as depicted in the Byzantine manuscripts (Job 32:1-5; figs. 2, 3).

In a 12th-century miscellany fromVerdun(fig. 5) Job's wife appears together with his four friends. The three elder, two wearing diadems, are seated on the left next to the dungheap, and on the right the small figure of Elihu turns to Job as if speaking. Behind Elihu towers the figure of Job's wife, her head covered with a large shawl.

The representation in the Heisterbach Bible, perhaps fromCologneof c.1240 (fig. 6), resembles that in our manuscript: Job is seated on a dungheap to the right, but with five and not four figures approaching him from the left: the four friends wearing Jewish hats and his crowned wife.

The depictions in our Rashi commentary and Heisterbach Bible are a conflation of the arrival of three friends (Job 2:11-13) with that of the fourth, Elihu (Job 32:1-5), in the presence of his wife (2:9-10). In a Bible fromParisof c.1220-1226 (fig. 7) and in the Moralia in Job (fig. 4) the presence of all the protagonists is depicted, but not their actual arrival. On the other hand, in the two Byzantine manuscripts and the Verdun Miscellany the arrival of Elihu is depicted, while the three older friends are seated in silence (Job 32:1-5).

The headdress of Job’s wife in our illustration resembles that in the contemporary Paris Bible (fig. 7), but her dress is unique since it reveals her breast (fig. 8). It is interesting to note that Rashi, in his commentary on TB Gittin 90a, remarks on the custom of some non-Jewish women of France of slashing their dresses from the armpit downwards, so that from the side the flesh is seen (Git. 90b: ופרומה משני צדדיה: אצל אצילי (ידיה כדרך אדומיות שבצרפת שבשרן נראה מצדיהן. The Talmud considers wearing such a dress as a cause for divorce (Shereshevsky 1974, pp. 106ff).