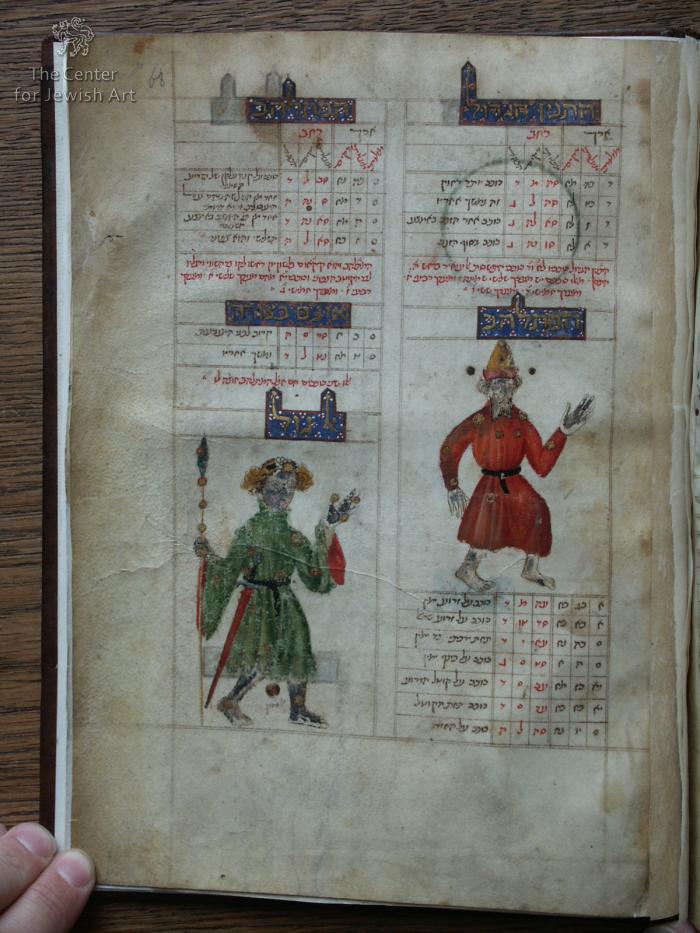 The page includes headings followed by illustrations and associate tables for two constellations, Cepheus (המתלהב) and Bootes (אל גול), which end is on the verso of the page (fol. 68v, see document).

The first constellation Cepheus is illustrated on the right by a man (oriental king) with beard split in the middle stepping barefoot to the right and raising his right hand. He is wearing red dress and Phrygian hat; the uncovered parts of his body are painted in pink (now black, the pink colour retained through the black colour of his face).

Thirteen silver and gold bezants marking the stars of this constellation are spread on and around him according to the table: eight gold stars on his body, three on his hat, and two other smaller silver stars, which are "not in the form" (אינם בצורה) flanking his hat.

The following constellation Bootes is illustrated on the left by a warrior with a diadem on his blond hair, stepping barefoot to the right. He is dressed in green rob with wide sleeves and a sword, holding a spear in his right hand and raising his left.

Twenty three stars of the constellations represented by silver and gold bezants, thirteen of which are outlined in red, are spread on and around him according to the table on the verso of the page, as followed: twenty-two gold stars (two are worn) are on his body and spear, and one silver star is placed outside his "form", between the legs. It is inscribed אל סמאך (“Al samach"?) in small semi-cursive script probably added by a later hand.

The page includes also on the top right the end of the Draco's table (which start on fol. 66v, see document).

The headings of the constellations Draco, Cepheus and Bootes, and the title "Not in the form", are written within small rectangular panels with gold borders in burnished gold letters on dark blue ground surrounded by dots and floral motifs in white and red colours. The upper border of the panels extends upwards to include the flag of the letter lamed.

The tables are written in alternating red and brown ink including headings in geometrical (zigzag) shapes in micrography.