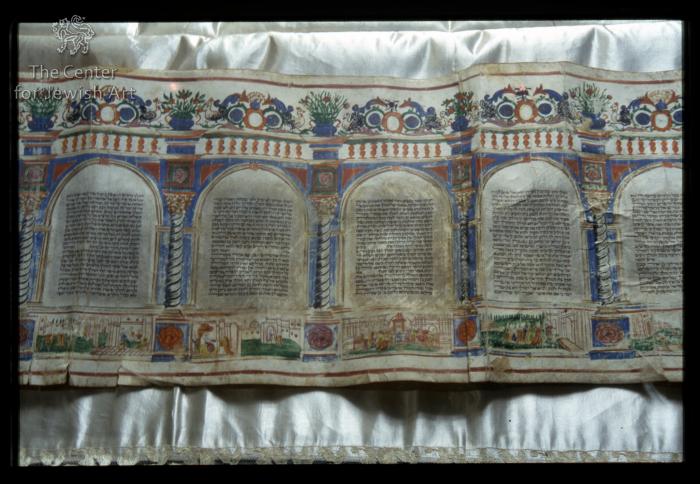 The decorative scheme surrounding cols. 3-7 (sheet no. 1) contains arcades that support a balustrade located in the upper margin with pairs of turkeys and roosters flanking the cartouches above each arch. Flower-filled vases atop each column separate these decorative illuminations. The lower margin is filled with figurative scenes that chronicle the narrative of the Book of Esther:

Frame 3 (only partly visible): on the right, Ahasuerus sits on his throne, accompanied by the seven princes of Persia and Media (Es. 1:14). He holds a scepter in his left hand and his other hand points to a man, most likely Memucan, who stands before him. Six other men stand behind Memucan (?) and there is a soldier behind the king's throne. The scene illustrates the moment when the king asks his advisers for advice regarding the fate of Vashti (Es. 1:13-20). On the left, two royal messengers ride on horseback towards a city in the background (Es. 1:21-23).

Frame 4: in the center of this frame, a group of women is brought into the king's court (Es. 2:1-4), lead by a man who is most likely Hegai (Es. 2:8); possibly the first of them is Esther. On the left side of the background, there is a carriage.

Frame 5: in the center, King Ahasuerus is seated on a canopied throne and is flanked by eight men sitting on benches. The King's arms are outstretched and he holds a crown in his right hand. He is about to place this crown on the head of Esther who kneels before him. Behind her stand four women (Es. 2:17).

Frame 6: on the right side of this frame, Mordecai stands by a gate in the wall and looks at two men who are probably Bigthan and Teresh (Es. 2:21). On the left side of the frame, Haman approaches Ahasuerus who is sitting on his canopied throne. The king holds a scepter in one hand and gives Haman his royal signet ring with the other (Es. 3:10). A man, possibly a guard, stands behind the throne. There is a fountain in the center of the cartouche.

Frame 7: on the right side of this frame, a male figure - most likely Haman - dictates the decree against the Jews to a scribe who sits at a table with two other men (Es. 3:12). On the left side of the frame, the crowned Esther stands in a walled courtyard with two handmaidens. A man wearing a turban - possibly her servant, Hatach - is facing her as if they are in conversation and another man in a turban - most likely Mordecai - stands in front of the palace gate in the background (Es. 4:4).

Images of the scroll beyond this point are currently lacking, but are identical to the other Gaster II style scrolls.

For another scroll representing the same type of ornamentation see ID 34123.

The scroll may have been accompanied by a decorated benedictions sheet and a bag (or piece of green fabric).