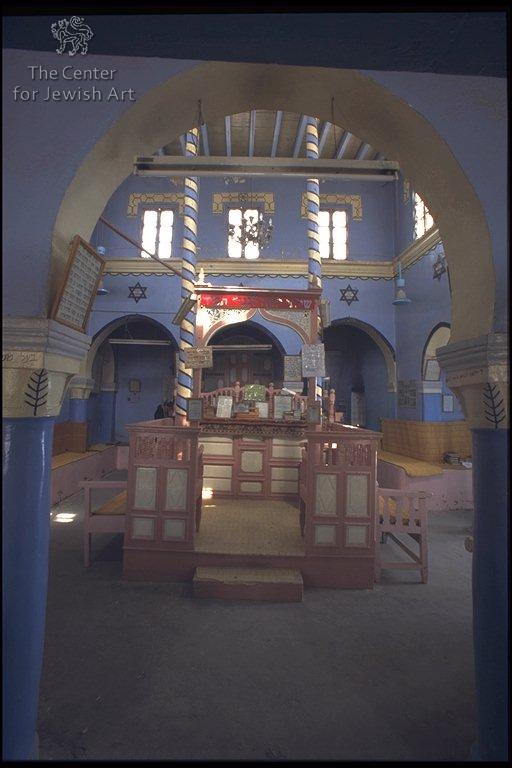 The prayer hall, located on the northern side of the compound, is contiguous to the open-air courtyard, and is a rectangular basilica of a single floor with a central second clerestorey. Both spaces are reached through the western façade, which borders the alley.

The basilica comprises a rectangular space surrounded on its east, west and south by colonnades of round columns carrying horse-shoe arches. The columns support a square clerestorey raised above the central space, occupied by the large reader's desk, thus creating a centralised liturgical space (see: main photograph).

The single Torah ark is located in the eastern wall, forming a central east-west axis with the teivah and the main entrance (fig. 2). The sittings are on built benches, which run along the walls and around the reader's desk.

Two cylindrical columns, which were added in 1853, support the ceiling and are built on either side of the reader’s desk (see: Suggested Reconstruction; main photograph and fig. 3).

The clerestorey provides light through twelve windows, three on each side. Each window is marked by a Star of David enclosing the name of one of the Twelve Tribes of Israel (based on the Book of Zohar part 2, 251:1; main photograph) on the eastern wall: “Reuben, Simeon, Levi”. “Judah, Issachar, Zebulun” are depicted on the northern wall, while”Dan, Naphtali, Gad” are on the western wall. The last three tribes "Asher, Joseph and Benjamin” are placed on the southern wall.

A wooden compartment is built in front of the entrance door. Another entrance to an unidentified rectangular space is on the hall's north-western corner, adjacent to four blind arches, possibly part of the surrounding corridor, which was later blocked. A door leading to a back corridor is set to the right of the eastern wall.

The entire building is painted in blue and white. The walls are in blue with white lintels and cornices. The grooved twisted columns are blue and topped by trapezoid white capitals decorated with a branch in each corner. The Torah ark, reader’s desk and benches are painted in pink and white.

The names of Jacob’s sons are enclosed within twelve Stars of David, corresponding to the twelve windows in the clerestory.

The columns supporting the ceiling were fashioned according to a new mode, prevalent in Tunis in the mid-19th century.