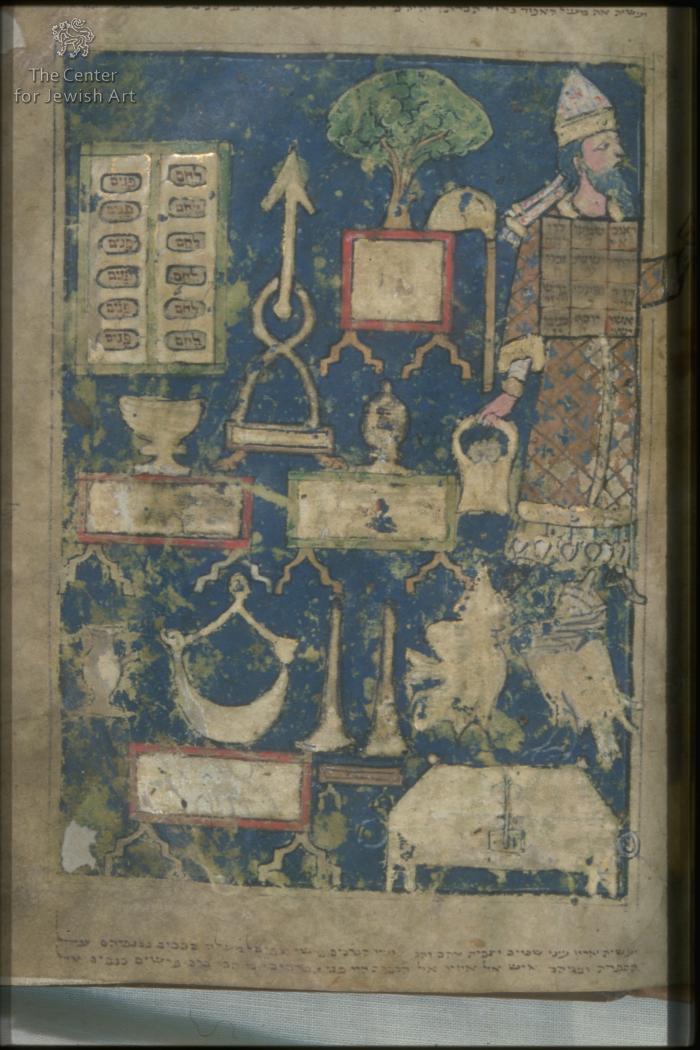 Aaron, who stands at the top right of the page (fol. 155v), lights the menorah depicted in the opposite page (see fol. 156) with a torch, held in his left hand. In his right hand he holds a small bucket, the kuz. Aaron, wears a miter on his head and a breastplate over a long robe adorned with bells at the hem. The breastplate is inscribed with the names of the twelve tribes and the names Abraham, Isaac, Jacob andIsrael.

Behind him, to the left, is a stand surmounted by a tree symbolising theMount of Olives.

It is flanked by a flesh hook on the right and a shovel on the left.

On the far left is the table of shewbread with twelve loaves arranged in six pairs, inscribed with the words "shewbread" לחם פנים.

Beneath the tree stand covered goblet and possibly the jar of manna.

On a stand beneath the shewbread table is a bowl.

Below Aaron is the Ark of the Covenant depicted as a four legged table and a ring for hanging theArk's poles on each corner. Two bird-like cherubim with facial features and pointed Jewish hats hover over theArk, facing each other.

To the left of the cherubim are two trumpets situated over a stand and two other implements: a cauldron and a jar, possibly the Laver and its stand.

The implements on both folios are rendered in burnished gold on blue ground. Most of the gold has flaked off revealing a layer of white gesso and traces of the original outlines in lead pencil beneath.