The depiction is based on Rashi's commentary according to which "Simeon himself had thrown him into the pit" (commentary I:34v, 3rd column; Gen. Rabbah 84:16). Indeed we see him pushing Joseph's head down with his right hand and pulling off his red garment with his left. This scene is a conflation with the next where merchants with camels on the left are offering money to buy Joseph. The brothers are common to both scenes, and so is Joseph: his upper body is being pushed into the pit, while his left leg is lifted as if to climb out of the pit, if compared to similar scenes (figs. 2, 3). Who are the merchants? According to Rashi and the Bible the merchants were Ishmaelites, although the Bible also mentions alternately Ishmaelites and Midianites (Gen. 37:28, 36; 39:1). Rashi explains these inconsistencies by listing a number of consecutive sales (I:35, top 2nd column; Tanchuma Buber, Vayeshev 13). A comparable depiction is found in the Munich Psalter, a Latin manuscript from Gloucester (?), England, c.1210 (fig. 2). 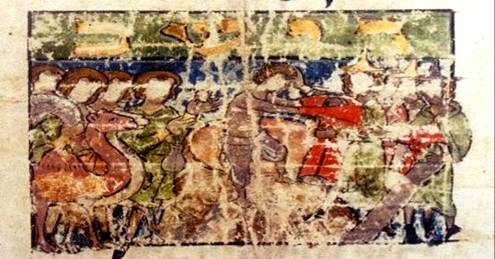 Fig. 1: Stripping off Joseph's coat; Joseph being thrown into the pit ; Lifting Joseph out of the pit; Selling Joseph, Munich Rashi's Commentary on the Bible, Munich, BSB Cod. hebr. 5, I:34 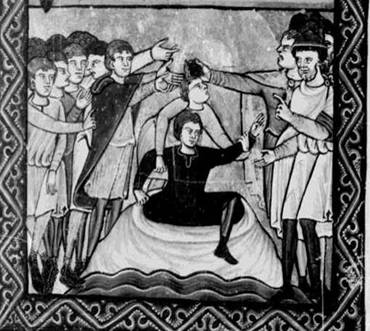 In the centre Joseph is being pulled out of the pit by one of his brothers, his left leg over the edge. He is flanked on the left by his brothers and on the right by a group of merchants who are handing them a purse of money. In contrast to our illustration this is a coherent final scene. 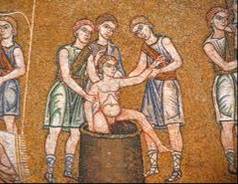 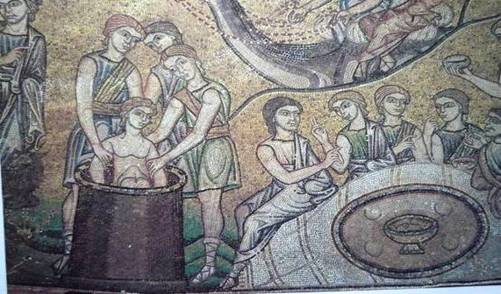 Similarly, in the mosaics in Venice of 1200-10, Joseph is being lifted out of the pit by three brothers, his left leg dangling over the edge (fig. 3). The scene is clearly identified as such because throwing Joseph into the pit shows three brothers pushing him down (fig. 4). This is an earliar scene, separately depicted. Another separate scene depicting the actual sale of Joseph to the Ishmaelites including handing over the purse, is found on a single leaf, part of a Psalter painted in Oxford by William de Brailles (fig. 5; Morgan 1982, Cat. 71). 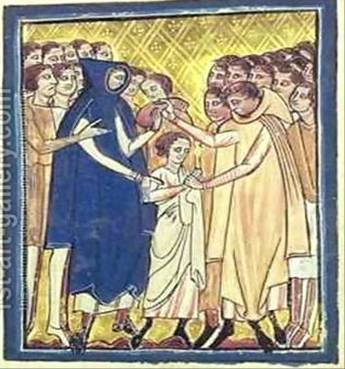 All faces are completely scratched out; the necks, Joseph’s body and the scroll have turned grey; the gold leaf of some letters and of the Jewish hats has flaked off.