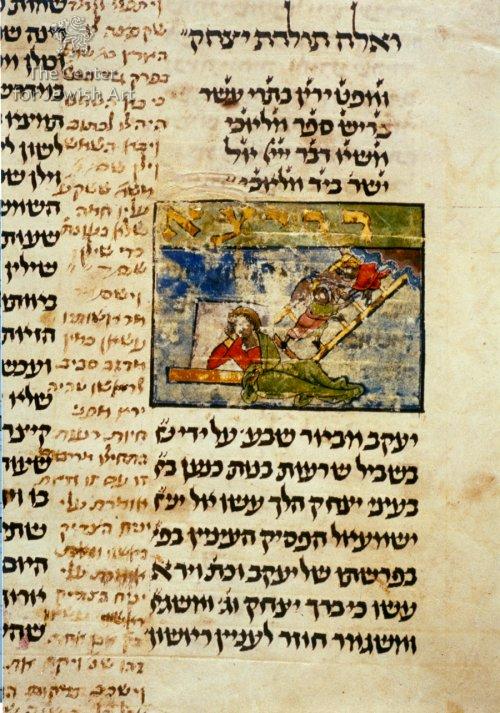 Vol. I, fol. 25v: The initial word Vayeze (וייצא, And Jacob went out) of this parashah (Gen. 28:10 - 32:3) is written at the top of the illustrated panel in gold leaf on a green ground, set below the explicit of Veelle (חסלת ואלה תולדת יצחק) and its haftarah (ומפטירין בתרי עשר ברִיש' ספר מלאכי משא דבר ה').

The panel depicts Jacob's dream on a partially faded blue ground, illustrating the commentary on Gen. 28:10-15. Jacob is reclining on the yellow base of a square altar behind him, his head resting on his right arm. He has brown hair, a red tunic and green pallium. Behind him on the right are two confronting angels on a gold ladder, the lower one accending, the other decending from a blue and magenta cloud. The accending angel wears a green tunic and a magenta mantle, the second a red garment.

Effaced plummet inscription in Hebrew display script in the outer margin, next to the panel:

The presence of an altar behind Jacob alludes to the commentary (I:25v, 3rd column on Gen. 28:11, 18) according to which Jacob rested his head on a single stone which belonged to the altar of Isaac's sacrifice on Mount Moriah. Jacob set up this very stone in Bethel and anointed it (based on BT Chulin, 91b). In the Monreale mosaic of c.1186 (fig. 1), Jacob's head rests on three stones. This depiction alludes to another midrash (Midrash Rabba, Bereshit 68:11), mentioning also two, four or twelve stones, which were fused into one when Jacob placed them under his head. The form of the single stone in the Winchester Psalter of before 1161 (fig. 2) resembles that in our illustration. 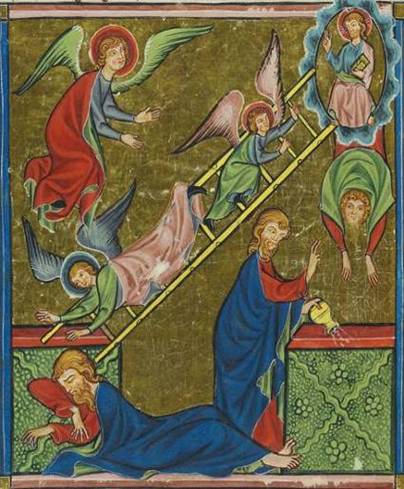 An earlier example of Jacob's dream appears in the Millstätter Genesis and Physiologus of 1120-1150/60 from the South Bavarian region (fig. 3). The iconography has Jacob sleeping on one stone at the foot of a ladder on which are two angels, one ascending, the other descending. A similar composition of angels on the ladder is portrayed in the World Chronicle of Rudolf von Ems of c.1300 perhaps produced in Zurich (fig. 4). Jacob's stone on the left in the form of an altar is similar in shape and colours to that on the right denoting the stone he anointed at Bethel. Perhaps these altar-like stones allude to the altar of sacrifice of Isaac, as explained in our Rashi text. 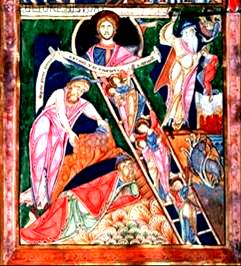 A more explicit visual connection between the Sacrifice of Isaac and its altar, and the dream of Jacob and its stone as mentioned in Rashi's text, is found in the Lambeth Bible from Canterbury of c.1140-50 (fig. 5). The Sacrifice of Isaac on an altar on Mount Moriah is seen at top right of the lower register. Jacob, at Bethel, is lying on several stones, over which he is pouring oil in the following scene. All these examples show two or more angels on the ladder. In our manuscript, however, the arrangement of the angels follows the biblical text and Rashi's commentary: climbing first and descending later (עולים ויורדים; I:25v, 3rd, column; based on Midrash Rabba 68:12). 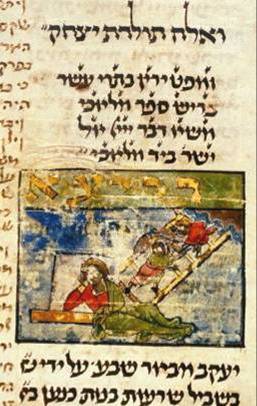 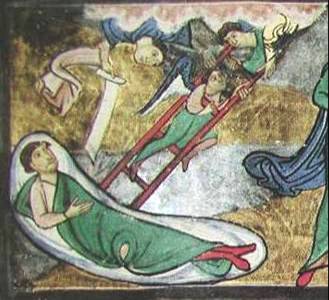 This feature appears in the late 12th-century Gumbertus Bible from Regensburg (fig. 7), where one angel is ascending the ladder and the other appears from clouds in heaven, similar to our depiction. Moreover, this example, in which the artist omitted the image of God (unlike other Christian examples), is similar to our manuscript (fig. 6). On the other hand, in the later Golden Haggadah of c.1320 (fig. 8) and the Sister Haggadah of the mid 14th century (fig. 9), both from Barcelona, the face of Christ was replaced by the faces of one and two angels respectively, set in the clouds. 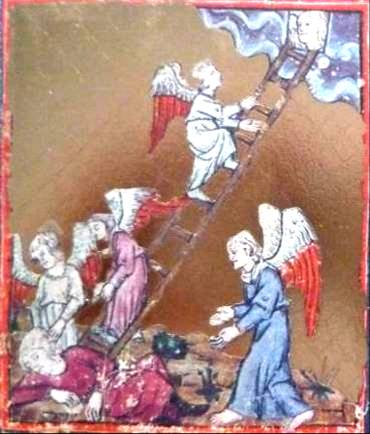 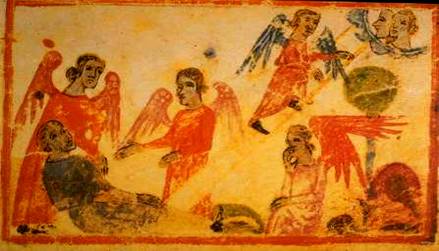