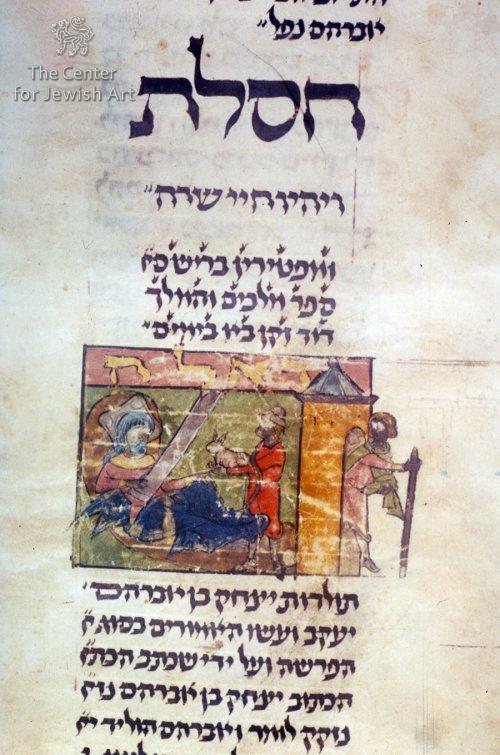 Vol. I, fol. 21v: The initial word Veelle (ואלה, And these are) of Parashat Toldot (Gen. 25:19 - 28:10) is written at the top of the illustrated panel in gold leaf letters on a magenta ground, set below the explicit of Vayihiyu (חסלת ויהיו חיי שרה) and its haftarah (ומפטירין בריש ספר מלכים והמלך דוד זקן בא בימים).

The green background panel depicts Esau asking for Isaac's blessing while Jacob is fleeing on the right, illustrating the commentary text (I:24v; Gen. 27:30-41). The old bearded Isaac, with light blue hair, is reclining in bed on a cushion, holding a scroll in his right hand. He wears a magenta garment with a yellow (once golden) collar, and rests under a blue coverlet. On the right stands Esau with a bow dangling over his arm, presening a hare to his father. He wears a red tunic and an originally white hat. Jacob, portrayed as a blond youth wearing a short magenta tunic and green chlamys, is escaping through a yellow ochre tower gate with a blue conical roof. He looks back while leaving, and holds a walking stick in his right hand.

Effaced inscriptions in plummet in Latin by a 13th-century hand, and in Hebrew display script by a later hand:

The illustration (fig. 1) refers to the biblical text (Gen. 27:30) in which the return of Esau from hunting was immediately followed by Jacob's departure from his father. The connection between the two acts יָצֹא יָצָא)) gave rise to Rashi's commentary (זה יוצא וזה בא, this one was leaving and that one was coming in) which follows Genesis Rabbah (66:5). 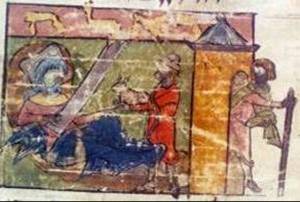 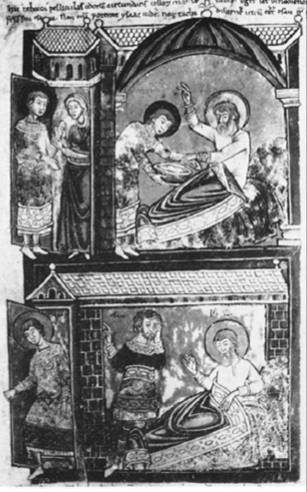 A close parallel to our illustration is found in the 12th-century Mosan Miniature Cycle from Liège or Stavelot of c.1150 (fig. 2; Klemm 1973; Scheller 1995, pp. 123-131). In the upper register Isaac is blessing Jacob and in the lower one Esau is asking for Isaac's blessing while Jacob is fleeing, similar to our illustration.

In the mosaic of Monreale of c.1186 (fig. 3), the story is likewise depicted in two separate scenes though slightly diffrently: on the left Isaac is blessing Jacob while Esau is hurrying home, followed on the right by Jacob fleeing while Rebecca stands at the city gate. Apparently our artist chose the last scene from a larger story cycle with an emphasis on Jacob's flight which is followed by his dream at Bethel, as it appears in Monreale and in our Rashi commentary (fol. I:25v).