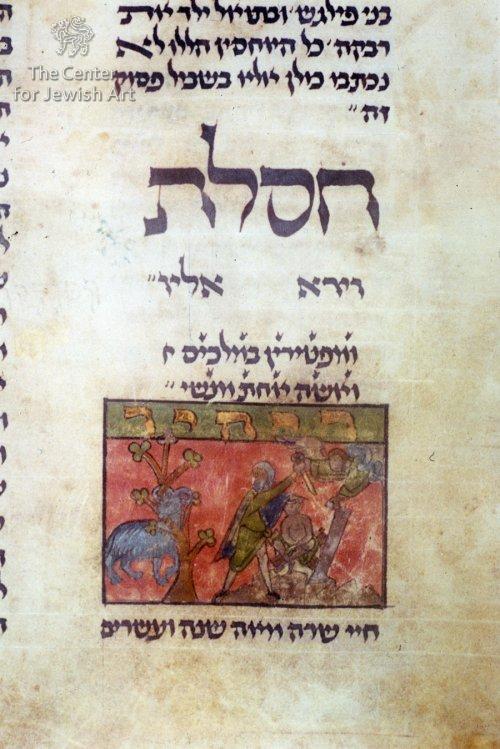 Vol. I, fol. 18v: The initial word Vayihiyu (ויהיו, And [Sarah] was) of Parashat Chayey Sarah (Gen. 23:1 - 25:18) is written in gold leaf on a green ground above an illustrative panel, and set below the explicit of Vayira (חסלת וירא אליו) and its haftarah (ומפטירין במלכים ואשה אחת מנשי).

At the centre of the panel stands the bearded figure of Abraham his head turned toward the ram on the left. His left hand is placed on Isaac's head and his right, holding a raised knife, is arrested by the flying angel emerging from a blue cloud in the top right corner with a long blank scroll in his left hand. Isaac, wearing a green loincloth and unbound, is seated on crossed faggots with arms and legs crossed. On the left a blue ram is hanging from a tree by its horns. Abraham and the angel each wear a green tunic and Abraham a blue mantle; Abraham’s hair is in light blue, the angel’s is brown. The scene takes place on the brown hill ofMountMoriah, against a magenta background.

The faces of Abraham, Isaac and the angel are not erased. The black ink features can clearly be seen, except for those of the angel which are very faint. The facial features were drawn on the parchment ground, as were Isaac's torso, Abraham's legs and hands, the knife, the angel's wing, the piece of sky and the hilly ground. Clearly visible is the plummet drawing of rocks, Isaac's torso and the angels' wings, which were not overdrawn in ink.

Plummet inscription in Hebrew by a later hand in display script to the left of וירא אליו: ויהיו (Vayihiyu).

The panel depicting the Sacrifice of Isaac illustrates the biblical text of the previous Parashat Vayira (Gen. 22). It is, however, linked to the text of Rashi's commentary on the following Parashat Chayey Sarah (I:18v; Gen. 23:1-2), which explains that the reason for Sarah's death was her witnessing the sacrifice. Visually the Munich Rashi (fig. 1) follows a Byzantine iconographical tradition. 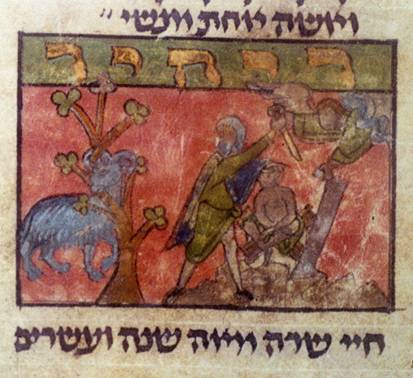 Comparison with the Cappella Palatina in Palermo, for example (fig. 2), shows that although the composition is similar, the positions of the ram and the angel are reversed: in the manuscript Abraham looks backwards to the ram and in the mosaic to the angel. 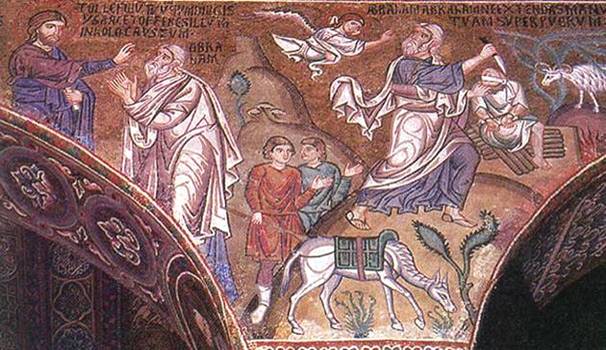 However, in both Isaac is sitting on crossed faggots and not lying on an altar, Abraham is brandishing a knife in his right hand and holding Isaac’s head with his left. The ram is caught in a thicket but the angel arrests Abraham’s hand only in our manuscript. Earlier Byzantine manuscript illustrations are, for example, the 9th-century Cosmas Indicopleustes (fig. 3), the Homilies of St. Gregory of Nazianzus (fig. 4), and the 12th-century Smyrna Octateuch (fig. 5). These illuminations derive ultimately from early Christian and Jewish sources such as the 5th-century Coptic church wall-painting of El Bagawat in Egypt (fig. 6), or the Beit Alpha synagogue mosaic of the 6th century (fig. 7). These five examples (figs. 3-7) have an altar of fire and, except for the Nazianzus, have the hand of God instead of an angel. 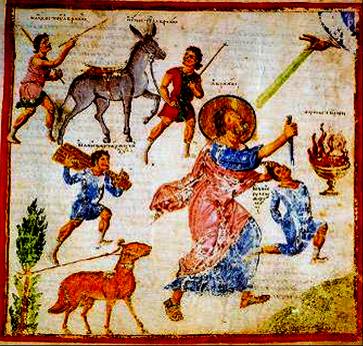 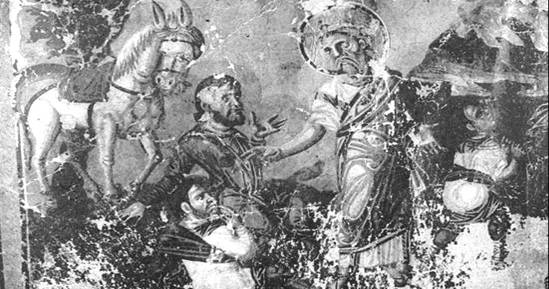 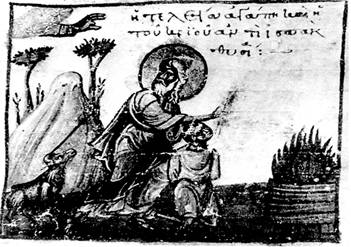 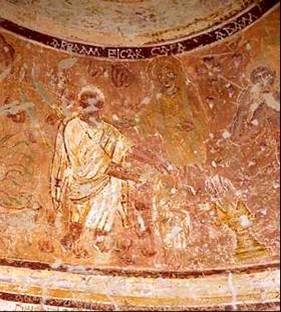 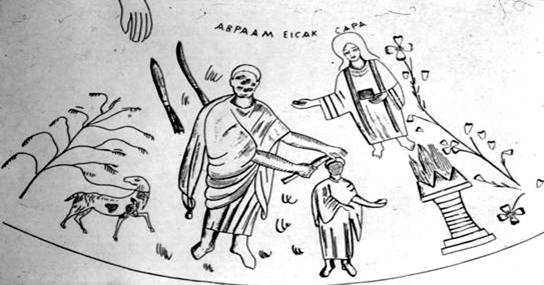 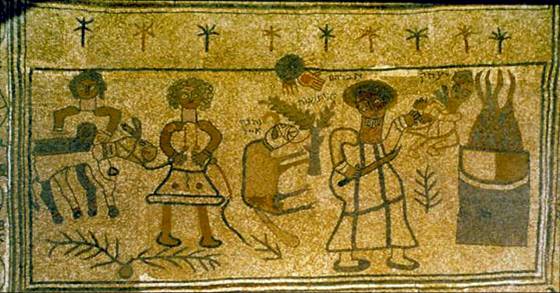 The knife which Abraham holds in all these examples is in accordance with the standard interpretation of the Hebrew word ma'achelet (מאכלת) as knife, and with Rashi's commentary on the verse (Gen. 22:6) based on the midrash (Gen. Rabbah 56:3; Tanhuma, Va-yira 23). The knife is also mentioned in the Septuagint, hence its illustration in Byzantine depictions. On the other hand the Vulgate uses the word sword (gladius), which is prevalent in Western (fig. 8) as well as in Jewish Western art such as the Ambrosian Bible (fig. 9). 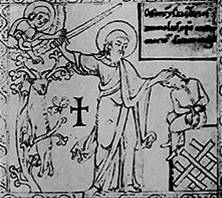 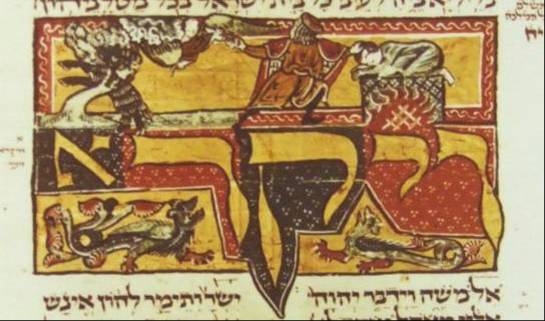 This Bible was perhaps produced in Würzburg for R. Joseph son of R. Moshe, the patron of our Rashi Commentary, at about the same time. It is interesting to note that the iconography of the Bible draws on a Western rather than a Byzantine source (Metzger 1974, p. 551 and n. 53). Fig. 9: Sacrifice of Isaac The Ambrosian Bible Würzburg (?), 1236-1238 Milan, Biblioteca Ambrosiana B 31 inf., fol. 102 (Jerusalem, CJA Schubert Archive) In our illustration Isaac's hands and feet are not bound but crossed diagonally in front, not as in Rashi's interpretation of TB Shabbat 54a, which elaborates on the binding of Isaac's hand and foot or hands and feet behind him. To sum up, the Byzantine elements in our miniature, such as the faggots and not an altar on which Isaac sits, and the knife which Abraham holds instead of a sword, reflect the influence of Byzantine illumination on Western and Jewish art in the 13th and 14th centuries (Turner 1970, pp. 133-168; Frazer 1970, pp.187-189). Rashi's commentary, which is written below the illustration in our manuscript, explains Sarah's sudden death as caused by witnessing the sacrifice. The commentary is based on Pirkei Rabbi Eliezer (ch. 32, Friedlander 1916, p. 234), Genesis Rabbah (58:5) and Tanhuma (Warsaw, Parashat Va-yira, 23). It describes how the devil showed Sarah the binding of her son by lifting her up, thus causing her death. The presence of Sarah in the sacrifice scene is depicted and inscribed as early as the 5th-century El Bagawat wall-painting (fig. 6). However, the textual version in which the devil is lifting Sarah up appears only in our manuscript (I:18v, 2nd column). This text was added by Rabbi Joseph Kara, Rashi's pupil (b. 1050-1055; Gutmann 1987, p. 80). It is interesting to note that the only known illustration of this unique text of the devil lifting Sarah up is in the Regensburg Pentateuch of c.1300 (fig. 10). However, no connection between these two manuscripts is known.