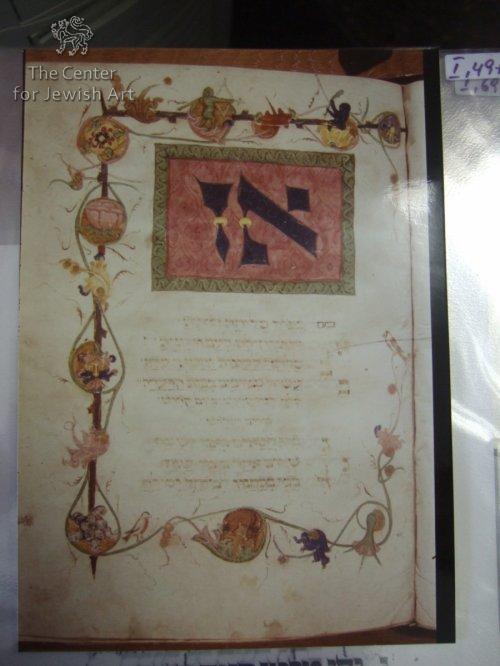 Vol. I, fol. 49: The opening page for the yozer ) אז ביום כפורThen in the Day of Atonement; Davidson, Thesaurus, א 2106) for the morning service for the Day of Atonement is framed by rich floral scrolls partly coiled round a bar. The initial word אז (Then) is written at the top of the page in blue display script within a rectangular, green-framed, magenta panel. The blue acanthus leaves, magenta palmettos and pleated green band are outlined in darker colour and highlighted with yellow and white. The stems of the letters are decorated with yellow bell-flowers.

The foliate marginal frame is composed of a scroll with twisted acanthus leaves, enclosing mostly large flowers on a gold-leaf ground. Two loops in the upper frame are inhabited by a green putto archer on the left aiming an arrow at a blue ape which is raising a club.

The scroll on the left includes four elongated loops entwined along a silver branch: two have open flowers, one includes a rose and one a lion mask. The acanthus loop in the bottom frame encloses a doe licking its hind leg. Brown ink tendrils and gold dots extend from the branches, and two small birds are perched on the lower left and top right stems of the scroll.