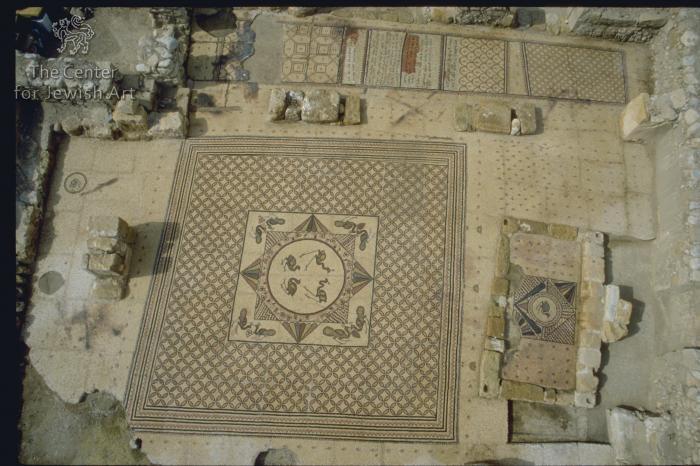 Four strata can be distinguished in the synagogue: Stratum IIIb- The earliest synagogue: a simple prayer building consisting of one large hall paved with a geometric mosaic floor. The entrances were in the northern wall, which faces Jerusalem. Stratum IIIa- The main hall of the synagogue was divided now into a nave, eastern and southern aisles. A niche was set in the wall facing Jerusalem. Three entrances were situated on the western side of the building, and a a porch with three columns stood befors them. Stratum II- The main phase of the synagogue, which is extant today.It consists of a main hall with three aisles in the east, west, and south and a corridor-narthex along the western aisle. Opposite the center of the wall facing Jerusalem, is an apse and a bimah in the south. A multicolored mosaic was laid on the synagogue floor. Excavations surrounding the synagogue show that it was connected to the other buildings in the area. To the west and north-west of the synagogue, roads and private dwellings were recoverd. Two Mikva'ot were found to the south-west and north of the synagogue, and a two-roomed housed, similar in size to the synagogue, was excavated. This adjacent building may belong to the synagogue. There is evidence throughout the site of the conflagration which destroyed Jewish En Gedi.