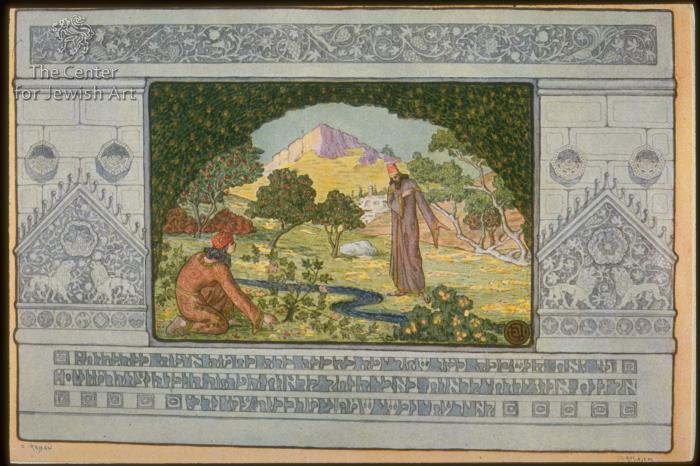 The picture illustrates Song of Solomon 6: 10-12. The scene takes place at a garden fruit trees. A man is standing in its center wearing a crimson robe. His left hand is on his chest while the right one gestures backwards. His head is turned down to a young woman who is picking flowers and looking at him beyond a tiny brook that streams between them. The woman has a vine seeding in front of her. In the far background there is a city, at the foot of a gray mountain. Above the picture lays a beam with vegetal interwoven motives of vine, pomegranate and fig leaves. Both sides of the picture represent a stone wall with relieves. The relieves represent two lions turning to each other in an interwoven vegetal background, below a gable. At the top of the gable is a rosette and at its base are seven emblems. Above the gables two plates are carved on the wall. The text is written below the picture, in gray block Hebrew letters, as if inscribed in a stone.