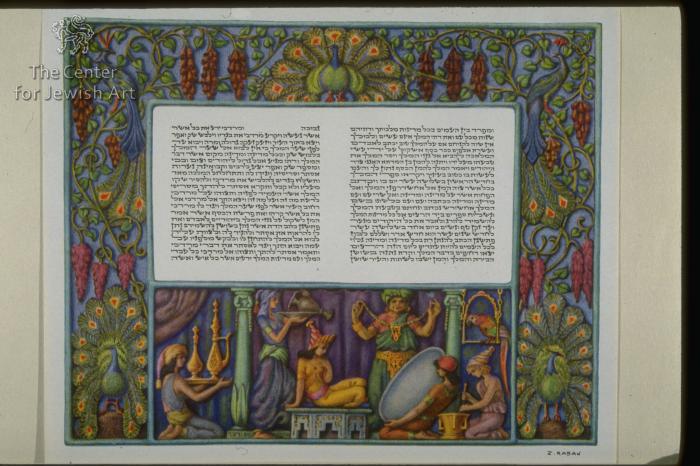 The picture below the centered text (Esther 3:8-4:11) illustrates Esther 2:9. On the other sides of the frame peacocks are depicted on a vegetal background. The picture below the text depicts Esther in profile, sitting on a stool, wearing a yellow dress and looking at the mirror in front of her. The mirror is being held by a maid seated on the floor. Behind that maid, another one is pounding something in a mortar. A parrot is sitting above her. Behind Esther's stool are 2 maids. The right one, seen frontally, is holding a pendant. The left one, seen in profile, is holding a bowl and a jug. Another kneeling maid is sitting beyond a column, carrying a tray with 2 jugs. 2 green columns are dividing the scene which has purple curtains at the background. The picture might illustrate Esther 2:9 :"And he speedly gave her her things for purification with such things that belongs to her, and seven maidens which were meet to be given her". Notice: the picture depicts only 5 maidens. The picture frame represents a peacock spreading its tail in the top center. On each of the upper corners a peacock is looking at him. On the right and the left buttom a peacock is standing, tail-spread. A plant of green leavs and purple blossom is intertwining among the 5 peacocks, on a blue background.