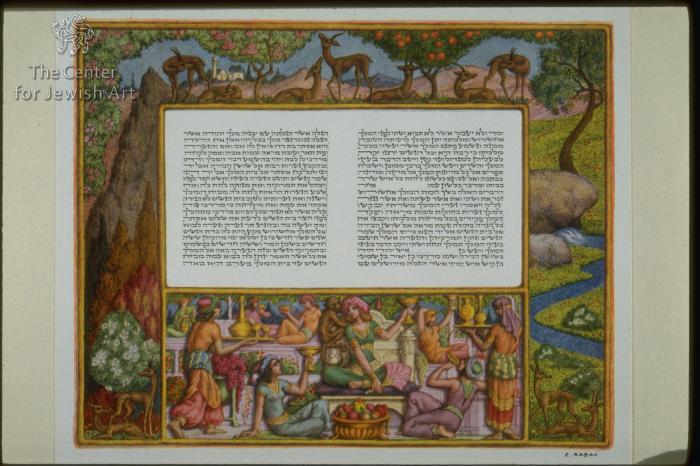 The illustration of Vash'ti's women feast (Esther 1:9), is below the text and does not illustrate it. The text, Esther 1:19- 2:14, is surrounded by a picture frame from the other three sides (see Ma. 1052.4.1). At the center of the bottom illustration Vashti is sitting cross legged on a throne, wearing a green tight dress and golden jewels. She is holding a cup in her right, raised hand and a small fan in her left hand, beside her legs. A monkey is sitting at her right. Two women are seated down her throne, holding cups and drinking. On the right and the left foreground a maid is serving drinks on a tray. On Vash'ti's sides, two women are raising cups. At the foreground other two women are holding cups and drinking, and at the left a women is playing a harp. The frame that surrounds the text depicts couples of deer in a flourishing meadow. The lower right couple of deer are down a stream. At the upstream are a rock and a tree in a meadow. Above the text seven deer are surrounding two fruit trees. On the lower left a couple of deer are depicted similarly to the right couple, under a fruit tree and cypresses.