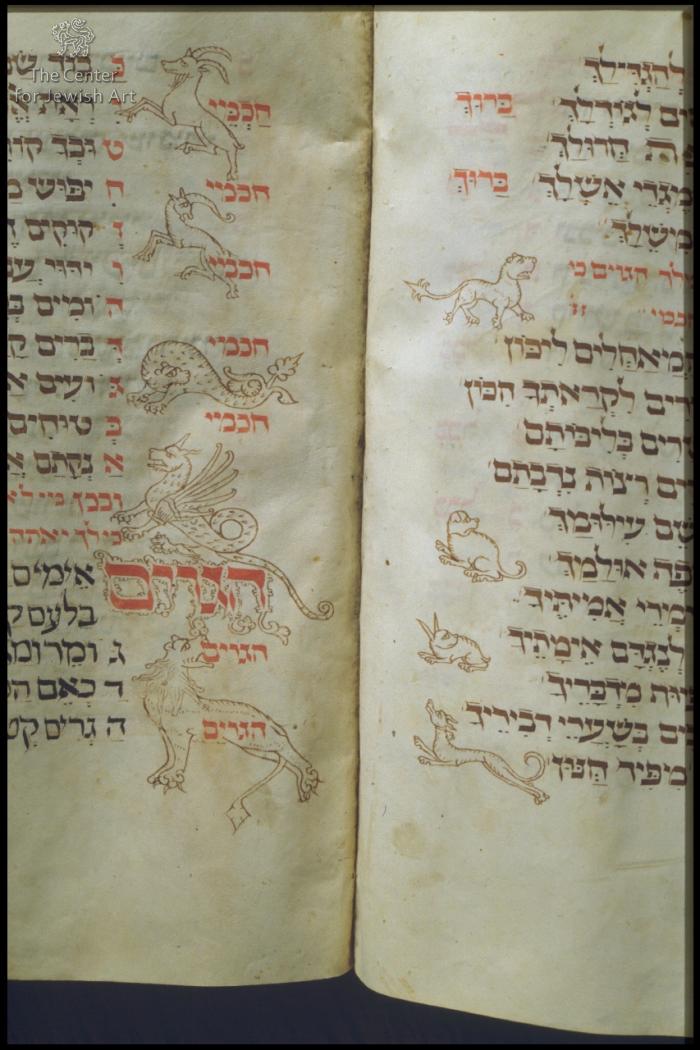 © Center for Jewish Art, Photographer: Unknown,
Fols. 130v-131: The inner part of two facing pages of the Shaharit prayer for the Day of Atonement includes brown pen-work animals executed by artist A, drawn in between the text space, filling the spaces at the beginning and the ends of lines. On fol. 130v two animals flank the opening verse of the piyyut - a lion cub with a long tail is on the left and a hedgehog with small circles depicted underneath him is on the right. Below the lion cub appear, one below the other: a small crouching dog, a crouching rabbit and an elongated dog, leaping towards the left side of the page. On fol. 131 the following animals are depicted on the right side of the text, one below the other: a goat leaping towards the left, a unicorn leaping towards the left with its head turned backwards, a dragon biting its leg, a winged dragon with a long tail facing the left and a lion stretching to the left while its head is turned to the right, opening its mouth over a small rubricated word: “The Gentiles” (הגוים) which is surrounded by wriggly work extending into small foliate flourishes and connecting to a tiny dog on top of the word.
Name/Title
Vienna High Holiday and Sukkot Mahzor | Unknown
Object
Mahzor
Object Detail
Fols. 130v-131, detail
Settings
Unknown
Date
1300-1350?
Synagogue active dates
Reconstruction dates
Artist/ Maker
Unknown (Unknown)
Origin
Germany | Southern Germany
|
Historical Origin
Unknown
Community type
Ashkenazi
|
Congregation
Unknown
Location
Austria | Wien (Bundesland) | Wien (Vienna) | Österreichische Nationalbibliothek (ÖNB)
|
Site
Unknown
School/Style
Unknown|
Period
Unknown
Period Detail
Collection
Austria | Vienna | Österreichische Nationalbibliothek (ÖNB)
| Cod. Hebr. 174
Documentation / Research project
Unknown
Category
Hebrew Illuminated Manuscripts
Material/Technique
Pen and ink