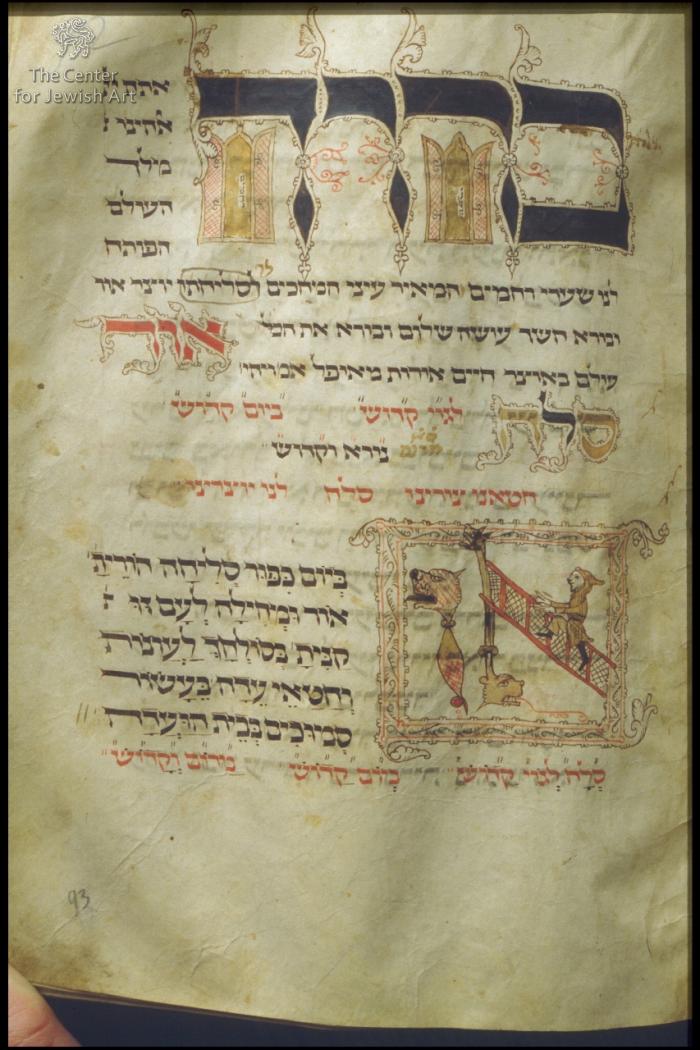 © Center for Jewish Art, Photographer: Unknown,
Fol. 93: Opening page of Shaharit for the Day of Atonement including a text illustration set in between the letters of a large initial word, an initial word panel incorporating zoomorphic and anthropomorphic letters and two small initial words, all of which were executed by artist A. The initial word “Blessed art thou” (ברוך ), opening the Yozer, is set on the top of the page, filling almost the entire width of the text space. The initial word is written in large display letters in very dark brown ink, surrounded by wriggly work extending in some parts to foliate flourishes. The letters are decorated with circles enclosing stylized rosettes in spared ground technique, set on the junctions of the letters which have small red pen flourishes extending from them. In the parchment ground spaces created by the letter “resh” ) ר ) and the letter “khaf sofit” ( ך ) are depicted two almost identical Gothic gates illustrating the words “Gates of Mercy” (שערי רחמים ) appearing in the text one line under the illustration. The gates are opened wide, filled in with gold powder, in the middle of which are vertical inscriptions facing upwards. The right one reads “gates”( שערי ) and the left one “mercy” (רחמים). The initial word panel for the word “Then” (אז ), is set in the lower section of the page, filling half of the width of the text space. The intial letters are mostly composed of zoomorphic and anthropomorphic elements executed in brown and red ink and brownish-yellowish wash. The “aleph” (א) is composed of a small hooded man who serves as the tip of the letter. He is climbing up a red ladder, which serves as the vertical line of the “aleph”, his hands stretched forward holding on to the ladder. (The parchment in between the rungs of the ladder is decorated with brown hatching). The ladder rests upon a pole, painted in a light brown wash, which serves as the leg of the "aleph" and extends on the top into a dragon’s head which seems to be eating the frame of the panel. The pole ends on the bottom with a lioness’ head facing the right, out of which potrudes a thin red tongue, serving as vocalization. Below the tongue is inscribed the word “patah” ( פתח ) (vocalized “ah”), which is the name of this vocalization symbol. The second zoomorphic letter “zayin” (Z) is composed on top of a lion’s head decorated with red hatching. The lion is facing left and has a potruding tongue. The bottom of the letter is decorated on the bottom half with red hatching and shaped into a twisted tail. The panel has a double frame of thin red lines filled with foliate scrolls and surrounded by wriggly work with floral extensions at the corners.
Name/Title
Vienna High Holiday and Sukkot Mahzor | Unknown
Object
Mahzor
Object Detail
Fol. 93
Settings
Unknown
Date
1300-1350?
Synagogue active dates
Reconstruction dates
Artist/ Maker
Unknown (Unknown)
Origin
Germany | Southern Germany
|
Historical Origin
Unknown
Community type
Ashkenazi
|
Congregation
Unknown
Location
Austria | Wien (Bundesland) | Wien (Vienna) | Österreichische Nationalbibliothek (ÖNB)
|
Site
Unknown
School/Style
Unknown|
Period
Unknown
Period Detail
Collection
Austria | Vienna | Österreichische Nationalbibliothek (ÖNB)
| Cod. Hebr. 174
Documentation / Research project
Unknown
Category
Hebrew Illuminated Manuscripts
Material/Technique
Pen and ink colours