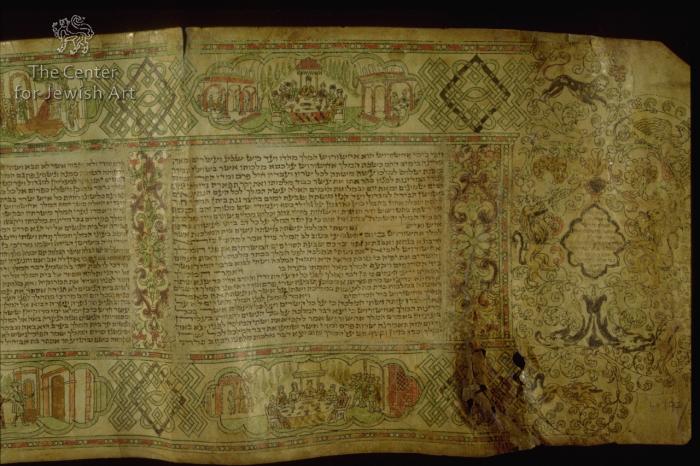 Cartouche 1 (upper margin): At the center, within the scenery of the palace gardens, the crowned and bearded King Ahasuerus sits on the throne under a high canopy at a round laid table. He is flanked by three men on the right and four men on the left, all of whom wear turbans and long gowns (Es. 1:3-8). On either side, there are arcaded buildings in which two groups of four figures sit at a table.

Cartouche 2 (lower margin): The crowned Vashti, within the scenery of the palace gardens, sits under a high canopy at a round laid table. She is flanked by three women on either side. On the right, a group of servants, all wearing turbans, enter the garden through a gate on the right; the first of them addresses the queen. Probably, they come with the king's order that Vashti should appear before him and his guests (Es. 1:10-11). The scene of the left can depict the moment when the queen, after her refusal, is taken from the palace by two men (alluding to Es. 1:19).

The name "Gaster I" was introduced by Mendel Metzger in an article entitled "The Earliest Engraved Italian Megilloth" published in the "Bulletin of the John Rylands Library" (48:2 (1966), 381‒432, esp. 390). The type was named after Moses Gaster (1856–1939), the rabbi, scholar, and manuscript collector of whose collections a scroll adorned with this pattern formed a part (at present this is the scroll Gaster Hebrew MS 710 stored in the John Rylands Library in Manchester). At least 25 manuscripts representing this type are still extant and are preserved in private and institutional collections. For descriptions of other scrolls representing the same pattern see IDs: 61, 1098, 21702, 34125, 34642, 36105, 36150.

The pattern features a number of decorative elements common with the scrolls of Klagsbald type (see ID 31, 34766).

Bibliography concerning the scroll from the NL:

Bibliography concerning other scrolls decorated with the same border: