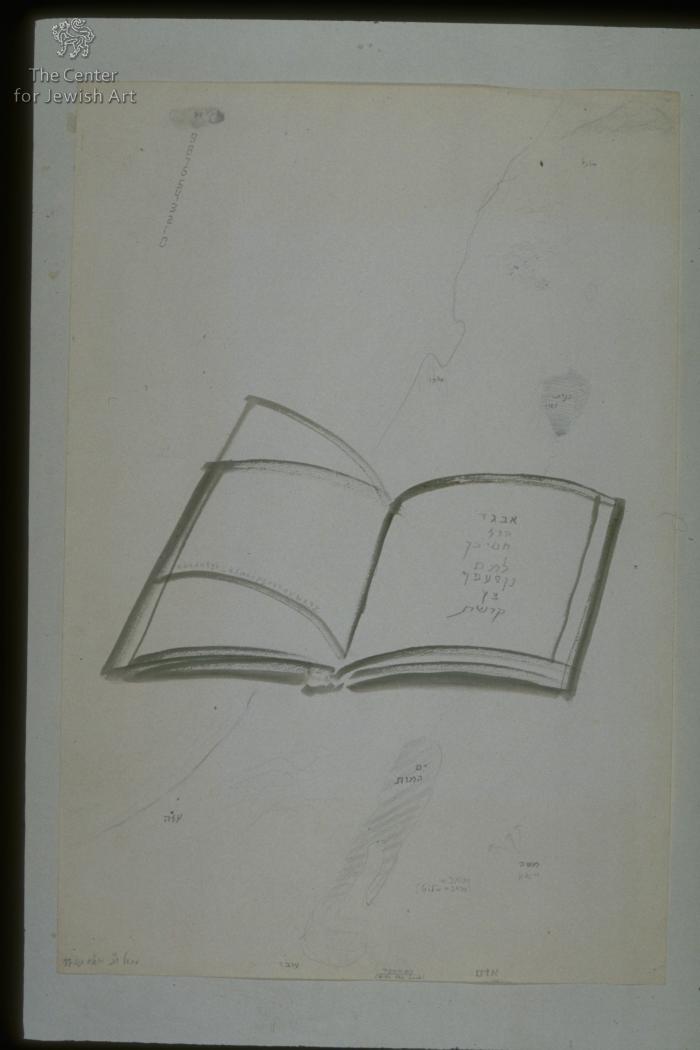 An open book, outlined in black is set at the center of the composition. The Hebrew alphabet is written in pencil in black block letters on the right page. אבגד הוז חטיכך נןסעפף למם צץ קרשת The book is superimposed over a pencil drawing of the map of Israel, and covers the central area of the map. The alphabet is written over the area of Jordan, Judea, Samaria and Jerusalem. Mt. Hermon is in the upper right. The Hula lake in the north signified by cross-hatching is connected by a line to the leading outlines of the Sea of Galilee. The inscription: "Sea of Galilee (Jesus) is written in Hebrew cursive letters at the center כנרת ישו The inscription: "Elijah" is written on Mt. Carmel. אליהו The inscription "The Dead Sea", is written below the book, at the center of the Dead Sea over diagonal lines. ים המות To the right of the Dead Sea is the depiction of a mountain and the word "Moses" written above it in Hebrew block letters. משה The word "Moab" is written between "Moses" and the Dead Sea in Hebrew block-cursive letters. In the lower left of the map is a black dot signifying the city of Gaza. מואב=מלוט The word "Gaza" is written beneath it in Hebrew block letters. Hebrew words are written at the bottom of the map in block letters, "man" on the right, and at the center "people of the book". עזה אדם עם הספר An inscription is written on the lower left in Latin cursive letters: "With the book". A Hebrew word is written to the left of the English sentence in block letters: "arava". ערבה A cloud is depicted in pencil, in the upper left with a Hebrew word written on it in cursive letters: "Cloud". A column of digits descends from the cloud representing rain, from top to bottom, written as follows: 9,8,7,6,5,4,3,2,1,0. עב